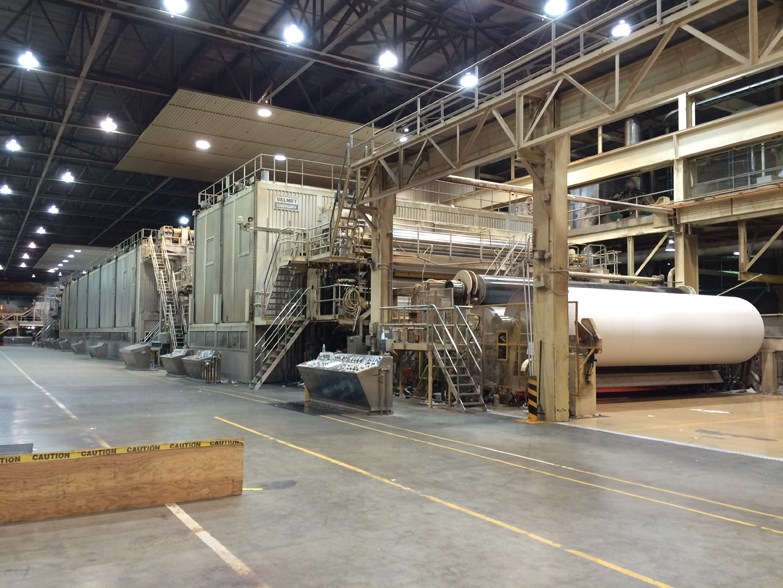 The paper mill at Howe Sound Pulp and Paper was shut down permanently on July 24.Photo courtesy of HSPP

Howe Sound Pulp and Paper’s decision to cut 171 employees – more than a third of its workforce – will have grave social and economic implications for Gibsons, Mayor Wayne Rowe said Wednesday.

“I’m very much concerned about the impact on the fabric of the community,” Rowe said after a meeting at the plant earlier in the day with HSPP management, union officials and representatives from all three levels of government.

HSPP’s parent company, Paper Excellence, announced July 23 that it was cutting about 180 employees and permanently shutting down its paper production operations at the Port Mellon mill, the Sunshine Coast’s largest employer. The closure was effective the next day.

“This is a very dark day for the membership and the community,” Unifor Local 1119 president Don Rheaume said after the announcement. “We recognize that and we’re going to do everything we can to mitigate this in every way we can.”

Affected employees will receive regular pay for 12 weeks, plus severance options, and their benefits will be intact until Dec. 31, company spokesperson Kathy Cloutier said.

“Transfer opportunities to vacancies within other Paper Excellence pulp mills in Nova Scotia, Saskatchewan and here in British Columbia are open to union and salary employees,” Cloutier said.

The paper mill is now being decommissioned to secure it in a safe and environmentally sound manner, she said.

“All crews will follow their normal schedules until Saturday, Aug. 1. From there a weekly schedule of shifts and duties will be provided to employees involved in the paper mill equipment decommissioning process.”

The closure will leave 345 employees at the mill, mostly in the kraft portion, Cloutier said.

The shutdown was blamed on the declining price and shrinking market for newsprint, but the timing was accelerated by the dwindling water supply in Lake Seven, which feeds the mill’s paper, pulp and power operations. The company said it hopes the immediate shutdown of the paper mill will allow it to stretch the water supply and avoid temporary closures in its pulp and power sections.

“The closure of the paper mill was imminent due to declining markets; however, the current drought has sped up the closure leading to the announcement on July 23,” Cloutier said.

“Historically, newsprint consumption has been a cyclical business. The ongoing evolution of today’s social and electronic media has shown that even in our best periods, the high points of this cycle do not create positive returns.”

Rheaume said the announcement came as a shock to the union.

“We knew the markets have been very challenging in newsprint and this announcement was a big surprise to us,” he said.

The company agreed to hold meetings with the union starting this week, and Rheaume said last week that the “numbers can change” after the two sides sit down, as they did when job cuts were announced about a decade ago at the mill. However, he acknowledged, “it’s a different situation because the employer has announced a permanent closure.”

He said the union hopes to secure severance and early retirement packages and retraining opportunities for affected members.

“The management has indicated that there are many options on the table, and we’re going to explore all of them,” he said.

Rowe said he was told at Wednesday’s meeting that each employee represented about $100,000 in earnings, making the direct economic hit to the local economy more than $17 million. That impact is two to three times larger when the multiplier effect is factored in, he noted.

He was also told that about 60 per cent of the affected employees live in the immediate Gibsons area.

The repercussions for the community will be far-reaching, he said.

The company said it carried out an extensive review to look at other product options for its paper operations, but ruled them out due to equipment shortcomings and lack of market demand for the alternative products.

In the company’s press release announcing the closure, HSPP general manager Steve Bird was quoted as saying the future of the mill lies with its “strong pulp and green energy opportunities that will continue to grow.”

That comment prompted speculation that Bird was referring to Metro Vancouver’s proposed incinerator, since Port Mellon had been one of the short-listed sites.

Cloutier said that wasn’t the case.

“HSPP is not affiliated with the proposed waste incineration facility by Metro Vancouver at Port Mellon,” she said. “HSPP will be exploring opportunities to produce more green energy power by further optimization of existing power generation equipment.”

No further job losses are foreseen at this time, the company said.