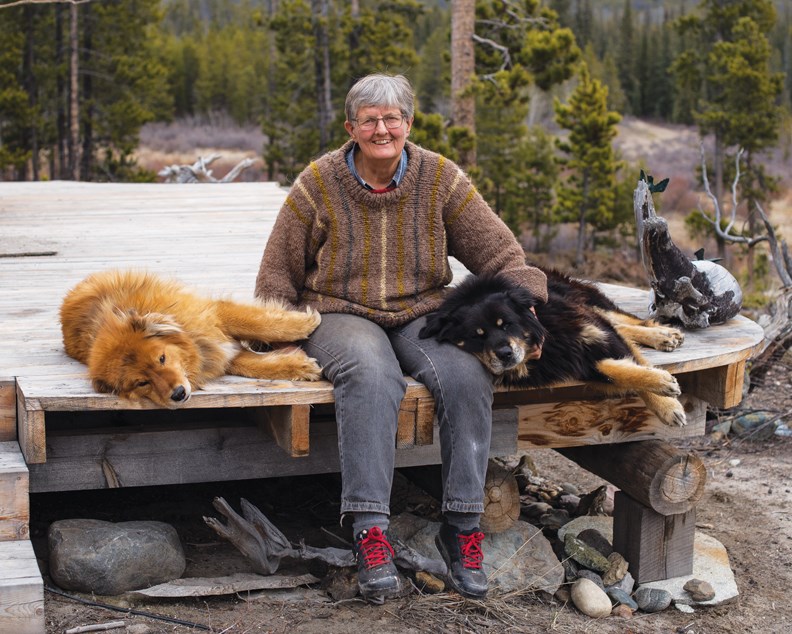 Harry is an exceptionally smart dog who tells a good tale. It’s fortunate that he is so articulate since many publishers reject “talking dog” stories, unless they are intended for children. But Harbour Publishing has a sure bet with this one, Harry, A Wilderness Dog Saga, a book that the enterprising pooch wrote along with his human, Chris Czajkowski. The result is a dog’s eye view of wilderness life suitable for all ages of readers from eight to adult.

Czajkowski is best known as the author of 11 previous books that describe life living alone in a remote part of B.C. where she built her own dwelling from trees that she felled herself, dragged to a building site and raised into homes that were only accessible by foot or float plane. She still lives off the grid, and she greets hardy tourists from the city who fly in to meet her and breathe fresh air. She also writes her many books and keeps company with her dogs, mostly rescue animals. Together they have experienced wild fires that came too close for safety and raging rivers that passed too close to home.

From Harry’s perspective, a dog that was once mistreated and homeless, Chris is the perfect companion, and he also gets along well with Badger, an older canine who is intent on passing on their ancestral stories. Readers hear from other dogs, Ginger, Taya and Max, and from Lonesome who also penned a book in 2004.

Their stories of wilderness living are entertaining, made with a fresh perspective through the eyes and the powerful noses of dogs. The book is sometimes a bit too cute – difficult to avoid when giving a dog human characteristics. The story works best when it sticks to real dog issues; for example, we read about Harry’s delight in finding a dead animal in the forest – surely the opposite emotion from those a human might express, but one that seems believable for a dog.

Harry will be appearing on the Sunshine Coast on Monday, Oct. 2 at 7 p.m. at the Sechelt Library and on Tuesday, Oct. 3 at the EarthFair store in Madeira Park at 10 a.m. And of course he’s bringing his Chris with him. He wouldn’t go without her – that’s because he’s a smart dog.