Two books: Rolling with the punches 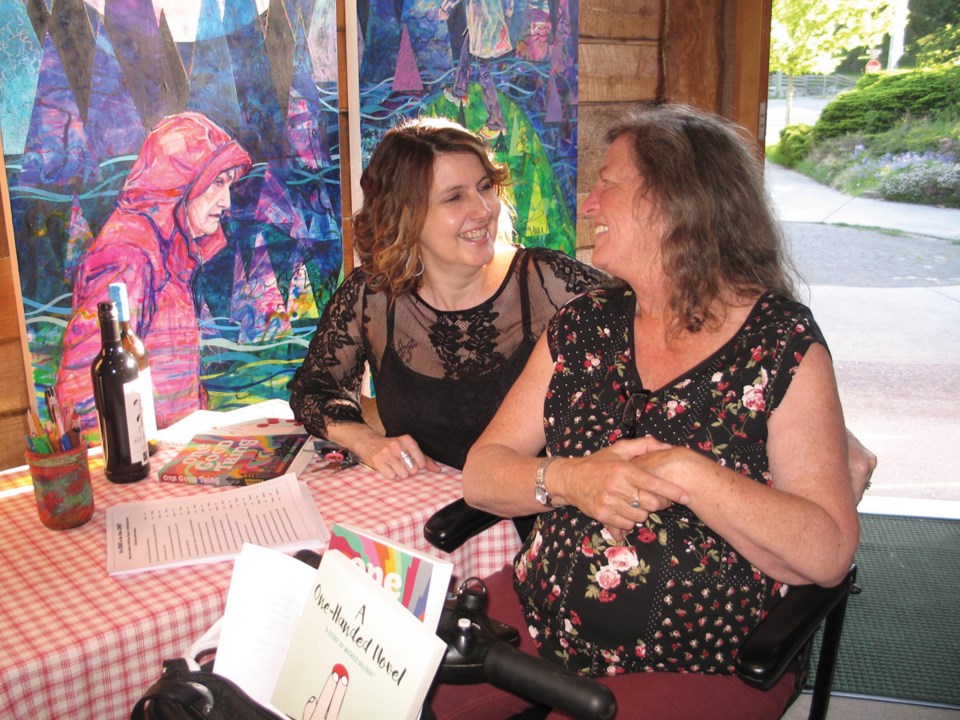 Authors Rebecca Hendry (left) and Kim Clark held their book launches together at the Arts Centre on May 5 against a backdrop of Jen Drysdale’s painting.Jan DeGrass Photo

Authors Rebecca Hendry and Kim Clark are friends who chose to hold their book launches together on May 5 at the Arts Centre in Sechelt with the co-operation of their two publishers. One Good Thing by Hendry is just out with Brindle and Glass publishing and A One-Handed Novel by Clark is by the Coast’s Caitlin Press.

There are similarities: both are fiction, yet both are clearly based on each author’s personal experiences. Both demonstrate a healthy ability of their main characters to roll with the punches that life delivers.

In One Good Thing Rebecca Hendry plumbs the mind of 12-year-old Delilah who is dragged through a succession of hippy communes and questionable living arrangements in the late 1970s by her volatile mother, Annie, until they arrive in Yellowknife to stay with Mac, Delilah’s father. When Delilah’s mother takes off again, this time without her, she feels abandoned. She makes friends with her father’s colleague, Will, who teaches her many things about the stars and about living in the rough settlements of the north. When he also disappears into a snowstorm, she is once again betrayed.

One Good Thing is a completely engrossing story, a study of characters who have been, in some cases, abandoned by society: mercurial Annie, adult Martha who likes comic books, City Jane who lives alone and writes, Red and Maggie who offer a free shower for those who live in shacks without plumbing. It’s a microcosm of life on the fringe of an isolated town. Delilah and her pre-teen friend Jones cope well by fending off school bullies and finding some kindred spirit in each other.

A One-Handed Novel by Kim Clark is subtitled A Story of Wicked Delight. The subtitle sums up the cheeky sense of humour that Clark has displayed in her previous books of short stories and poetry. This novel follows the daily life of Melanie, who is in her 40s, single and has gradually worsening multiple sclerosis. She, too, is rolling with the punches. She has managed to cope with her scooter as a means of getting around, she’s struggling to cope with poverty while living on a disability pension, and she travels to Costa Rica with a long suffering friend to try a new treatment for MS. But her biggest fear is the one that she’s been told by a physician: that her body can handle only six more orgasms. She doesn’t want to waste a single one. Sex becomes a preoccupation with her as the countdown begins in an often racy, sometimes raunchy, and always witty narrative.

Melanie is full of eccentricities: she talks to her limp left hand and runs a phone sex business on the side. It is fortuitous that, at this point in her life, she meets eccentric Leo who likes butterflies and lives in a converted shipping container. Their friendship is not the most romantic, at times it’s heartbreaking, but it makes for a good story.

This book has the most preposterous ending – it is totally unbelievable and will not be revealed here. The author won’t mind this criticism since she knows you will have to buy the book to find out whether or not you agree.

Check out Talewind Books in Sechelt to find both of these bright, new novels.