Twice The Nutcracker enjoyment for 2021

After going without any presentation of The Nutcracker at all in 2020 due to the pandemic, Sunshine Coast audiences will be treated to two different productions of the Christmas-season classic this coming December.
Feb 25, 2021 9:07 AM By: Rik Jespersen 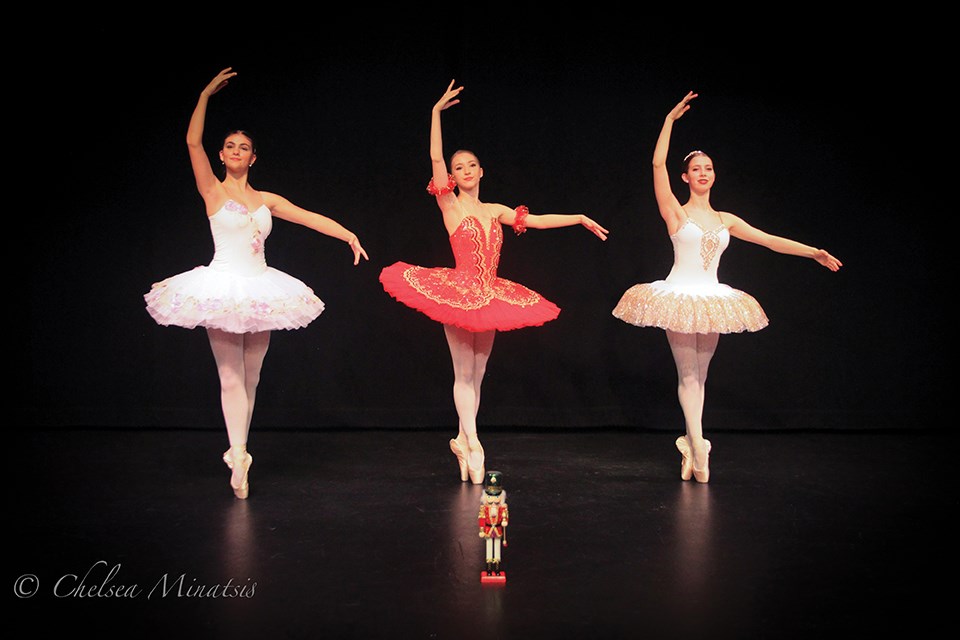 Three of the local dancers, from the left, Sophie Malcolmson, Brontë Hansen, and Eibhlin Minatsis, who will be appearing in the Sunshine Coast Nutcracker at Heritage Playhouse in Gibsons this year. CHELSEA MINATSIS Photo

After going without any presentation of The Nutcracker at all in 2020 due to the pandemic, Sunshine Coast audiences will be treated to two different productions of the Christmas-season classic this coming December.

Waldorf Ballet announced earlier in February that it is planning a version to be performed at Raven’s Cry Theatre in Sechelt.

The Coast’s three other major dance schools – Coast Academy of Dance in Sechelt, along with Dance Works Academy and Dominique’s School of Dance, both in Gibsons – have been collaborating since last summer to mount their own production, Sunshine Coast Nutcracker, to run from Dec. 16 to Dec. 20 at the Heritage Playhouse in Gibsons.

First auditions are to be held at the Heritage Playhouse on Sunday, Feb. 28.

Sunshine Coast Nutcracker promises in its advertising that it’s creating “A Classic Tale with a Modern Twist,” in a reference to some of the new routines to be added to the ballet by a half-dozen guest choreographers.

“There will be a few twists throughout the whole production, but it’s still going to have the traditional ballet that is intrinsic to the original Nutcracker and has been carried through over the last 100 years,” said Zoe Barbaro, of Dance Works. Barbaro is one of four artistic directors for this production, along with Dance Works’ Penny-Lea Hudson, Dominique Hutchison, of Dominque’s, and Julie Izad, of Coast Academy of Dance.

“But we’re going to be adding some moments of choreography that would include contemporary, some more opportunities for acrobatics, some lyrical, and we’re also going to do a little bit of tap,” said Barbaro.

The Nutcracker has been a tradition on the Sunshine Coast since 2012, when Kathleen Holmes and late husband David Holmes produced it under the non-profit organization they helped create, Coasting Along Theatre Society. Holmes moved off the Coast in the summer of 2020 to tend to family matters in her native Tennessee. The newly formed Sunshine Coast Nutcracker has acquired the costumes and scenery from the Holmes-led organization, so there will much about this version that will look familiar.

Barbaro said Sunshine Coast Nutcracker, as the Holmes’ productions did, will bring in a few up-and-coming guest performers from major dance companies in Canada for the demanding, top balletic roles in the show. There also will be A and B casts of many of the parts for young local dancers, Barbaro said, “because then a lot of children can have opportunities to play different roles.”

Masking and other COVID-19 protocols will be in place for the Feb. 28 auditions and later auditions and rehearsals throughout the year. Given ongoing concerns about the pandemic, the directors are also allowing video auditions.

“Just like in our studios, we have some students who are still training from home over Zoom or by a different virtual method,” Barbaro said. “So, we just wanted to extend that same offer so that it didn’t exclude any children that are still not comfortable coming into a public setting or into a class setting.”

Audition registration and more information can be found at sunshinecoastnutcracker.com.