Raising the curtain through art 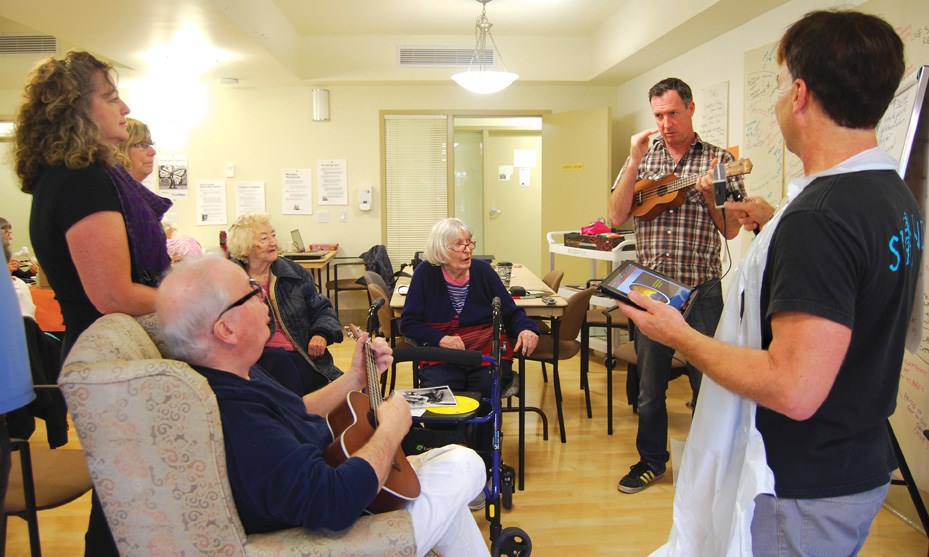 On the surface the project called Raising the Curtain is about creating a theatrical production by people with dementia in collaboration with professional artists, caregivers and community members. But it goes so much deeper than that, say two of its proponents: Chad Hershler of Deer Crossing-the Art Farm, and Bruce Devereux of Good Samaritan’s Christenson Village (GSCV) care home in Gibsons.

This project will connect with the Sunshine Coast’s other care centres, artists and the public. It works so much more closely with individuals in recognizing and being present with the person behind the dementia diagnosis.

“Dementia is a scary situation,” Devereux said, for the individuals and for their families. Over his years working with dementia residents as recreation and volunteer manager at GSCV, he has learned that it affects each person in a different way. How to communicate with each individual? He believes that the arts and creativity are vital to finding that common language.

“If music (for example) has been a part of their lives then why should that change after dementia?” he asked. “When you create, you feel excited.” Too often a doctor’s diagnosis sends the patient home to isolation and anxiety, a process that Australian dementia activist Kate Swaffer describes as “prescribed disengagement.” Happily, attitudes are changing in the face of growing research and an activist movement.

Raising the Curtain is a huge, three-year project that has received major funding from the Vancouver Foundation with other support coming from the BC Arts Council because of the project’s big arts component. It’s a team project involving a health care provider from a supportive GSCV, a community-based art program – in this case, the Art Farm – and the latest addition, Douglas College’s Department of Therapeutic Recreation with its point person Colleen Reid.

“It’s a new way of involving the community from beginning to end,” said Hershler. The Art Farm has been involved with other projects at Christenson Village in the past two years: most memorably the production by residents and artists that was the hit of the Art Crawl and also a pop-up art-making experience at Sunnycrest Mall. Hershler considers that the Art Farm has been a lot clearer in their own goals, that is, working with marginalized voices. It’s also made him think differently about aging – he regards it as a more positive process now when he sees the work that is underway and he gets to know individuals with dementia.

Devereux’s inspiration came from a trailblazer in the field: Anne Basting of Milwaukee, who sought to engage people with dementia and created the Time Slips program – a fun way of telling stories inspired by photos. She is currently speaking at international conferences on arts and dementia in Scotland and in England. Devereux and Hershler along with others from the community have tried out Time Slips at Christenson with the resulting book of stories that led to their Art Crawl production. They have also been encouraged to try the “Penelope Model” – a Basting-inspired process of developing a play co-written and co-produced by the residents along with many community volunteers and artists.

Raising the Curtain is at the development stage and is looking for others to join the team. Especially needed are three peer researchers, not academics in this case, but three early stage dementia persons to form part of the team and who indicate they want to give their input after living with the diagnosis.

“That’s what we’re excited about,” said Devereux, “the communication among the team members.” After that they will look for 15-18 participants drawn from all over the Coast to step forward and share their talents. If interested, contact Maggie Bosse, a recreation professional with arts background, at Maggie@deercrossingtheartfarm.org to talk about it.

There are still a few hurdles to jump: more fundraising is necessary to pay honorariums, also approval of the project’s protocols from the ethics committee of Douglas College, but so far everything is moving forward with enthusiasm. More information about the process is at www.imaginationnetwork.ca or on the website of deercrossingtheartfarm.org.