The first song Clay Hepburn ever wrote – which he dashed off in response to a kind of dare – is still the one he might be best known for.
Apr 22, 2021 10:24 AM By: Rik Jespersen Arts & Entertainment Writer 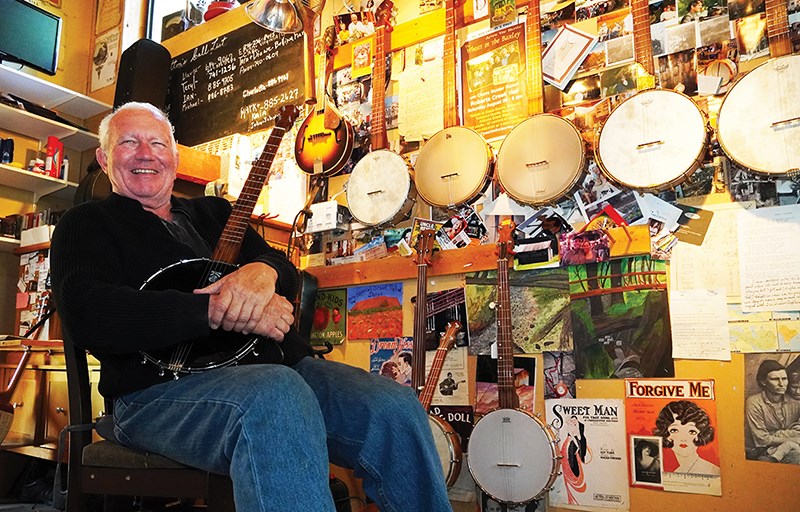 Clay Hepburn in his workshop with some of his latest banjos. Rik Jespersen Photo

The first song Clay Hepburn ever wrote – which he dashed off in response to a kind of dare – is still the one he might be best known for.

The Gibsons-area retired electrician was part of a song circle of amateur musicians who used to gather regularly in the 1990s to play along with renowned B.C.-born fiddler Erynn Marshall. At one point, Marshall challenged everyone in the circle to take some time to try to write a tune.

“Some people worked on it all year. They crafted it, they really went all out,” Hepburn told Coast Reporter in an interview. “But I was kind of like in high school, you know, I just got it done the night before.”

Hepburn said he was amazed at the quality of tunes everyone came up with, but they were also impressed by Hepburn’s song, a sweet ode to his father and childhood vacations, called Off To Montana. “It just sort of came to me, and I’ve been singing it ever since. People around town know that song now.” People know it elsewhere, too, as it’s been covered by the American acoustic quintet, Cabin Fever NW.

There have been a lot of songs since, many of them to be found on Hepburn’s 14-song album, Is There Anyone Out There?, which is posted for free listening and paid download on the website bandcamp.com. The country and folk-style songs, recorded by local musician Charlotte Wrinch with just his voice and guitar or banjo, “just sort of come to him,” he said. Hepburn is the kind of writer who doesn’t usually compose a song at will. It will suddenly show up as if gifted by a muse.

“I sit there and if it comes, it comes. Or it doesn’t,” said Hepburn. “I really believe that your subconscious just kind of works on it. Two weeks later, it spills out and you don’t know where it came from. It’s like, ‘Who’s moving that pencil?’”

Hepburn had been keeping up his playing in a song circle with an informal group of about a dozen local players, The Duttons, which had met regularly for years. That was until last fall, when the threat of COVID-19 became too risky even for outdoor gatherings.

But Hepburn has another musical vocation to keep him busy – making banjos. It’s a craft he’s enjoyed for decades, since his days of association with the Winnipeg Folk Festival in the 1970s, when he made his first instrument.

“There was this banjo player there playing a mountain-style banjo, an Appalachian-style, which is all wood,” Hepburn recalled. “I just loved it. I was attracted to that sound. You couldn’t buy a banjo like that in Canada. I had very few tools for doing that sort of work, but I managed to get something together. Mitch [Podolak], who ran the folk festival, was a banjo player. He loved the one I made and said, ‘Make another one.’ So, that’s how it started.”

Some 45 years later, Hepburn has now made many banjos, most of which he’s sold or given away. Among the nine instruments currently hanging on a wall in the workshop behind his home in Elphinstone, where he lives with his wife, Penny, is the latest banjo, marked number-160. It’s a beauty, made of walnut and brass. There’s also an Appalachian hanging there, like the first one he made, and a fretless banjo, great for doing slide-style playing. Most have price tags on them, starting at $400.

There will be more banjos to come from this workshop, and likely some more tunes, when the muse drops by.