Sunshine Coast documentarist Dianne Whelan is set to get a financial boost for her current film project thanks to fundraising campaign led by former Gibsons councillor Charlene SanJenko.
Oct 16, 2020 6:00 AM By: Rik Jespersen 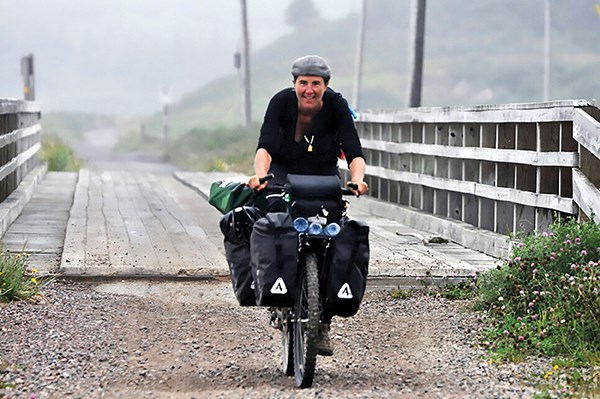 Sunshine Coast documentarist Dianne Whelan is set to get a financial boost for her current film project thanks to fundraising campaign led by former Gibsons councillor Charlene SanJenko.

Whelan is currently winding up filming 500 Days in the Wild, for which she’s been gathering images and interviews for the past five-and-a-half years as she’s traversed the 24,000-kilometre, cross-Canada hiking and biking route. She described the project as “an ecological pilgrimage to honour the land, the water, our ancestors, and to search for the wisdom needed to protect the earth for future generations.”

SanJenko, a consultant, producer, and performance coach, has organized the funding drive through the women-oriented organization she founded, PowHERhouse, described on its website as “a media house of global leaders for social impact.” As an extra incentive to help draw donations for the film, SanJenko enlisted the help of the Canadian Parks and Wilderness Society (CPAWS), a registered charity.

“We’re working in partnership with CPAWS to be able to give people a tax receipt,” SanJenko told Coast Reporter. “The majority of [donated] funds actually go to the production of the film.”

SanJenko said she hoped to have 100 women donate $1,000 each by the end of this year. In addition to a tax break, donors will also be designated as one of the “Mothers of the Film,” who will be honoured in the movie’s credits, get perks from the PowHERhouse organization and have priority access to screenings, tickets, and events with Whelan, including an online “Fire Circle” on Nov. 6.

“Dianne is one example of a powerful woman who is helping to disrupt how films are being financed,” said SanJenko. “I’m building a network with other filmmakers and people interested in media. [We’re having] conversations about building a new way to finance film and ‘impact media,’ and not have to rely on the typical channels that have happened in the past.”

Whelan recently won a US$25,000 award at the Doclands Documentary Film Festival in California to help complete her film. Whelan plans to start editing and post-production in coming months, with a release planned for 2022.

Details about donating to the film project can be found at powherhouse.com.