FibreWorks Studio and Gallery is still the unique artisan hub that it has been since it opened 15 years ago, situated in a unique complex of yurt buildings just a couple of kilometres up the highway from Madeira Park village.
May 28, 2021 6:00 AM By: Rik Jespersen Arts & Entertainment Writer 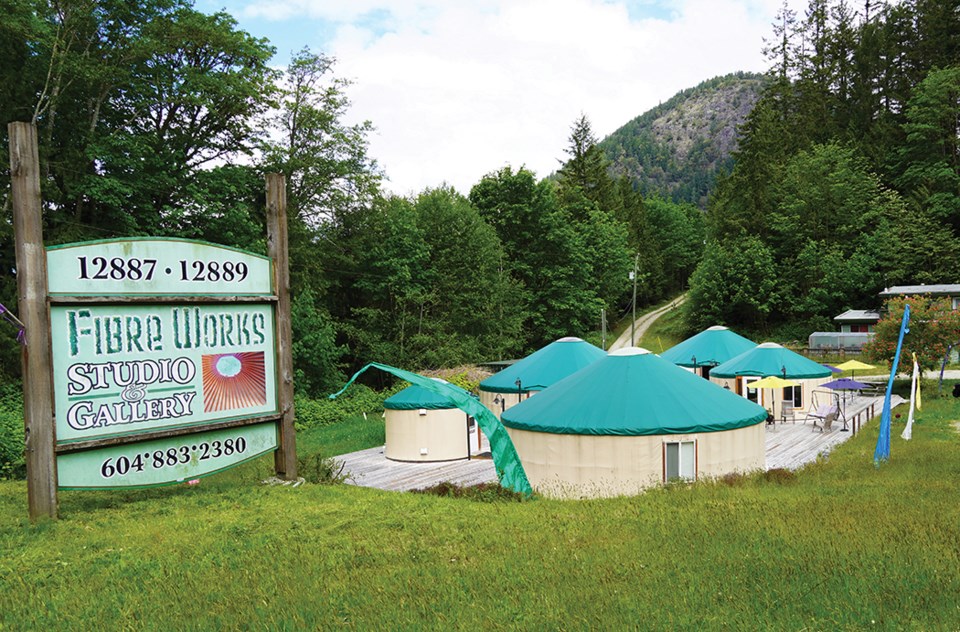 The Fibreworks yurt complex on Highway 101 includes a gallery, studio, workshop, among its buildings.Rik Jespersen Photo

FibreWorks Studio and Gallery is still the unique artisan hub that it has been since it opened 15 years ago, situated in a unique complex of yurt buildings just a couple of kilometres up the highway from Madeira Park village.

But there’s been an important change behind the scenes to help ensure that FibreWorks continues to thrive: At the beginning of April, the centre transitioned from a private enterprise into a non-profit society.

It had been executive director Alexis Bachs’ intention to go non-profit about five years after taking over from now-retired founder Yvonne Stowell in 2017, which would have meant changing the business structure in 2022. But the pandemic accelerated that plan.

“We were closed from April until the end of June [in 2020] and had to adjust our whole exhibit schedule because of that,” Bach said.

The gallery has traditionally stayed open full-time, spring to fall. To help make up for the curtailed schedule, a members’ show was added last year, plus a Christmas/winter market from the beginning of November until mid-December.

“No other Christmas crafts shows were happening last year, but because FibreWorks has the unique three spaces [28-foot-diameter yurts], we could have a larger number of people, but all still be safe and distant,” said Bach. “It was a great success and we’ve decided to keep it as a way of continuing to support our members.”

This year there are six five-week exhibitions, and six one- or two-day workshops from April until the end of October. Plans are also in the works for both a summer camp and a program that would take fibre-arts instruction into local schools, both of which made the non-profit transition even more practical.

“I have made a commitment to have more workshops and more opportunities for education, because that’s my passion,” Bach said. “I did research and found we couldn’t get any grants or any program support because we were a private enterprise. In switching to being a non-profit, we’re going to be able to open up that kind of community programming, to open opportunities to showcase established artists, emerging artists, and have a more robust residency program.”

Textile artist and arts administrator Nell Burns, a former co-chair of the Sunshine Coast Arts Council, has also come on board as a part-time managing director of FibreWorks. When asked if there were any drawbacks to an organization like FibreWorks going non-profit, Burns said there did not appear to be. “Not that we’ve come across and I can’t think of any forthcoming either,” said Burns. “It’s all just advantages so far.”

FibreWorks’ second exhibition of the season, Landbase/Home, by Caitlin ffrench, opened May 15. It features traditional, tactile fibre-arts content but also many two-dimensional pieces in support of the artist’s theme. “Using natural materials Caitlin ffrench has built representations of her memories – mapping travels and life events into tangible objects,” the gallery noted in a release.

FibreWorks is open Wednesday through Sunday. The Landbase/Home show is on until June 20.