Organizers of two of the Sunshine Coast’s popular summer events – the Festival of the Written Arts (SCFWA) and the Rogue Arts Festival – say they are exercising caution rather than rushing to increase ticket sales, despite relaxed p
Jul 7, 2021 5:11 PM By: Rik Jespersen Arts & Entertainment Writer 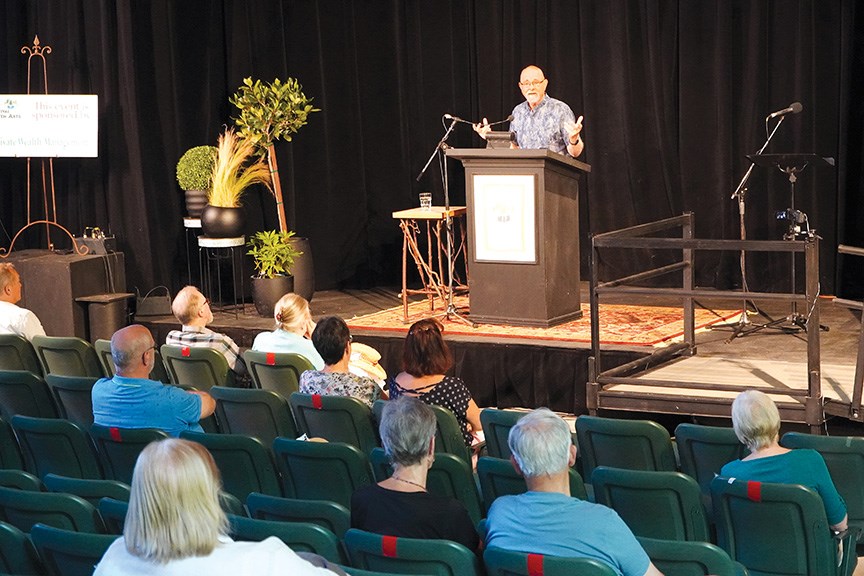 Madeira Park author and publisher Howard White opened this year’s Festival of the Written Arts on July 4. Strips of red tape on the backs of seats indicated where audience members could sit for safe-distancing.Rik Jespersen Photo

Organizers of two of the Sunshine Coast’s popular summer events – the Festival of the Written Arts (SCFWA) and the Rogue Arts Festival – say they are exercising caution rather than rushing to increase ticket sales, despite relaxed pandemic protocols that would allow larger audiences.

“[P]eople have purchased tickets and authors have accepted our invitation to appear in person based on sharing the space in our open-air [Rockwood] Pavilion with 49 people,” Jane Davidson, the writers’ festival artistic and executive director, wrote in a June 30 newsletter. “For many, this will be the first public gathering since the spring of 2020 and we respect that everyone has a different level of comfort.”

The pavilion in Sechelt is the site of 12 writers’ festival events stretched out this year over seven weekends, which started July 4. Just over 40 tickets were issued for each event, in accordance with previous COVID-19 protocols, and all events have sold out.

The pavilion has a capacity of more than 400 people and B.C. health authorities have since authorized a 50-per-cent capacity rule, which would allow 200 attendees. But issuing more tickets, despite the demand, is not the first priority, Davidson explained in an interview.

“This pandemic is not over. I think we’re doing really well on the Sunshine Coast. But not everybody is comfortable about reopening,” said Davidson. She added that she has heard from people who have expressed their thanks that audience sizes are being limited, and from others who have voiced frustration. “We’re hearing from both sides,” she said.

Davidson added that the festival’s board of directors will take up the matter of selling more tickets for the final nine events when it meets on July 19.

All 12 festival events are being professionally videotaped, with closed captioning, Davidson noted, and will be available online until the end of August.

The Rogue Festival of the Arts has opted to transform its customary three days of events in late August into a series of six Saturday evening music and arts gatherings at different outdoor locations starting July 24. But, as with the writers’ festival, assuring safe participation is more important than expanding ticket sales, according to artistic director Arwen MacDonald.

“A lot of people have been quite isolated and staying home. We really want to make sure, if this is one of the first things they do, that everyone’s feeling safe and taken care of. So, most of our events are going to stay at the 50-person capacity,” MacDonald told Coast Reporter.

“Quite frankly, if being able to sell a handful more tickets just increases people’s anxiety around going out, and it tenfold increases our staff’s workload, it just doesn’t seem worth it to me,” MacDonald said.

The one exception to the 50-person limit, MacDonald added, might be RogueFest’s final event at the sizable Rockwood Pavilion, with the band Queer As Funk on Aug. 21. That decision is yet to be made.