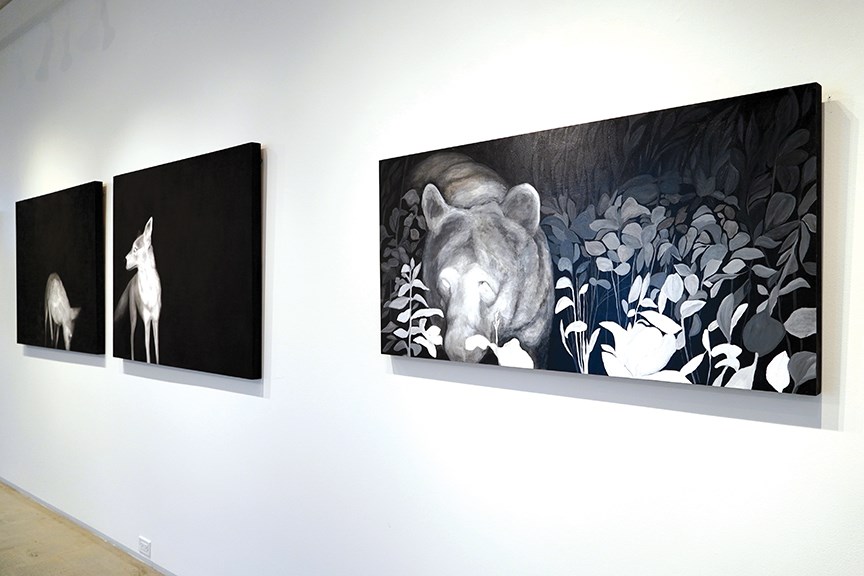 Artist Sarah Ronald said her exhibit is about one aspect of humans’ complicated relationship with wildlife.Rik Jespersen Photo

Although they are not photos, but are white pastel pencil drawings on blackened wood panels, that sense of intrusion into an animal domain is just the impression artist Sarah Ronald intended to create.

“The very existence of wildlife cameras and the resulting portrayals are a reflection of human behaviour and our complicated relationship with the natural world,” the Port Coquitlam-based artist said in her statement about the exhibit.

Ronald describes herself as a wildlife artist, and much of her work depicts animals in colour as well as black and white. The white-on-black series that is Territory was inspired as she was researching other animal images.

“I kept coming across these wildlife cameras,” Ronald told Coast Reporter. “There’s something haunting about them, because here they are doing their normal life, out hunting, or they’re out often at night, because that’s a safe time for them to travel without human interference. But then, there’s these cameras, where we’re still present, even when the animals feel safe to be there without us around.”

The large, often life-sized drawings in the exhibit are accompanied by a 17-minute animation Ronald has drawn, which is being projected in the GPAG alcove that is the Eve Smart Gallery. The work, with soundtrack, imitates the effect of animals encountering stop-motion wildlife video cameras.

Ronald donates partial profits from her art sales to non-profit wildlife organizations, “doing on-the-ground work to better the real lives of the wildlife” that appear in her artwork. Territory runs until Feb. 7.