Here are some questions you might not even have known were there to be asked (I didn’t either): Why did Emily Carr visit the Sunshine Coast in 1933 and what did she do while she was here? What strange animal did Carr add to her mobile menagerie durin
Sep 27, 2019 6:05 AM By: Rik Jespersen 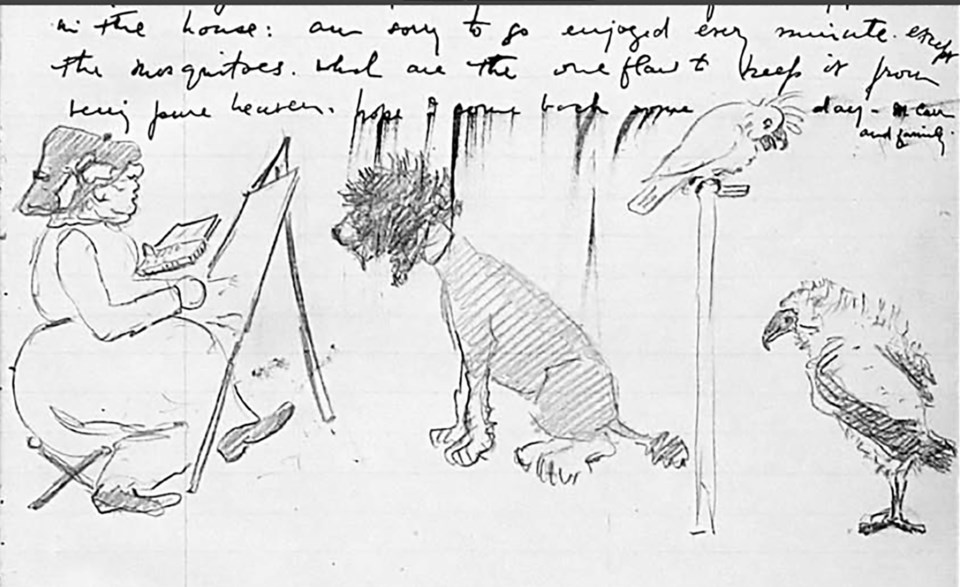 Carr added this sketch to her entry in the guest book of the Burnett Family Summer Home in Buccaneer Bay. Excerpted from the book Emily Carr’s B.C.: South Coast to the Interior, by Laurie Carter.Submitted Image, Original by Emily Carr

Here are some questions you might not even have known were there to be asked (I didn’t either): Why did Emily Carr visit the Sunshine Coast in 1933 and what did she do while she was here? What strange animal did Carr add to her mobile menagerie during her visit? Where was she standing when she created the painting entitled Sechelt, St. (Strait) of Georgia, and can we still visit that spot? And where did she stay at Buccaneer Bay?

You’ll find the answers in Emily Carr’s B.C.: South Coast to the Interior, author Laurie Carter’s third book in her trilogy on the travels of the first grande dame of Canadian impressionist landscape painters. Carter will read from and chat about the book when she visits the Sechelt Public Library at 3 p.m. on Monday, Sept. 30.

Carter, a long-time B.C. resident now living in Ottawa, had written several non-fiction and fiction books before undertaking the project, which slowly grew in scale. She started out in Haida Gwaii in 2012 and would follow the routes that Carr took on her many, long B.C. expeditions, including the Sunshine Coast – complete with a sketch she drew in a local guest book.

“At the time my intent was to do one book about travelling in B.C. using Emily Carr’s working and living sites as sort of milestones on my route,” Carter told Coast Reporter. “But very early into the project I just got hooked on Emily Carr herself, her life and her work, and quickly saw there was too much for one book. It kept evolving.”

What evolved was the trilogy, including the first two volumes, Emily Carr’s B.C.: Vancouver Island, then Emily Carr’s B.C.: Northern B.C. and Haida Gwaii. Carr’s penchant for exploration and her dauntless gumption compelled Carter to persevere, too, and undertake the seven years of research, travel and writing that it took to complete the books.

“A lot of it is to do with her personality, how adventurous she had to have been to undertake so much,” Carter said. “Looking at the time she was doing this travelling and where she was going, I thought, wow, that was a pretty interesting character. She was a lifelong learner, branching into her writing career in her 50s and 60s. That really appealed to me, how this woman kept exploring and searching and evolving, even as she got older. She just kept going.”

Emily Carr’s B.C.: South Coast to the Interior is available at Talewind Books in Sechelt and online.