What does a singer-songwriter mom do for creative fun when the pandemic keeps her at home for extended stretches with her young kids? She records an album with them, naturally.
Nov 19, 2020 10:49 AM By: Rik Jespersen 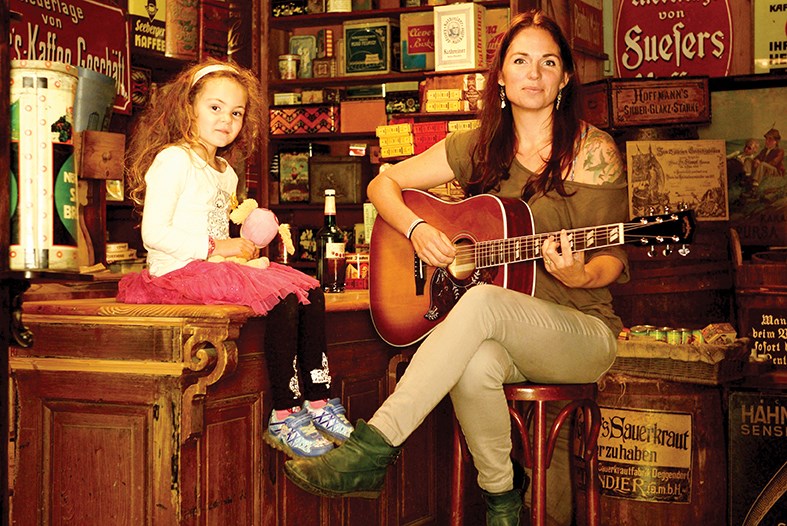 Songwriter Sarah Noni and one of her accompanying vocalists, daughter Juno.SUBMITTED PHOTO

What does a singer-songwriter mom do for creative fun when the pandemic keeps her at home for extended stretches with her young kids? She records an album with them, naturally.

“I had little songs that I was always writing for them for years and some of them we sang together a lot, lullabies and stuff,” Gibsons recording artist Sarah Noni told Coast Reporter about her “lockdown project,” as she calls it. “With COVID, it just was the perfect time because we had these long days, and the kids were at home and they love it when I pull out the microphone. That’s how it came about.

“We had so much fun doing it, and then I realized, oh, this is good stuff,” Noni said. “It was never the intention to make an album, but it ended up being something that was workable.”

The result is a seven-tune set titled Heart Times, performed by a collective Noni calls Your Invisible Wings, which includes her on vocals, guitar and keyboards, plus the voices of her children, Juno, Elliot, and Keanu, along with Coast musician Aristazabal Hawkes adding some stand-up bass. The mastering was completed at Monarch Studios in Vancouver.

“The concept for the album is two-fold,” Noni wrote on the Your Invisible Wings website. “First it was made for parents to have access to fun and dreamy music that helps kids wind down at the end of the day, and second, they are meant to be sing-along-soon-to-be-classics that parents are encouraged to sing to (and with) their children any time of day.

“Your Invisible Wings is ultimately a collective that believes fiercely in the magic of childhood and the power of children’s spirits,” she added.

The songs are also a testament to the magic of parenthood, with Noni, in My Love, singing lullaby lines like, “you have come to this world as a wondrous gift,” and, in the upbeat Wish Upon a Star, “you brighten all the spaces, places filled with joy and laughter.”

Noni is not ruling out yet more child-oriented songs coming out of the Your Invisible Wings collective. Grown-up collaborations, like 2018’s Sky Parallel, with violinist Sarah Fitzpatrick, are also always a possibility, said Noni. Meanwhile, another fresh project is close to completion.

“At the beginning of this year, I started a new album of my own solo work.” Noni said. “There’s seven songs there. That was meant to come out this year but of course, COVID delayed everything. In a couple weeks we’ll head back into Vancouver and finish that up so in early 2021, there will be another Sara Noni album of adult music.”

You can hear the Heart Times tunes on the album’s website, where they’re available for download or on CD – handy for those family trips in the minivan.