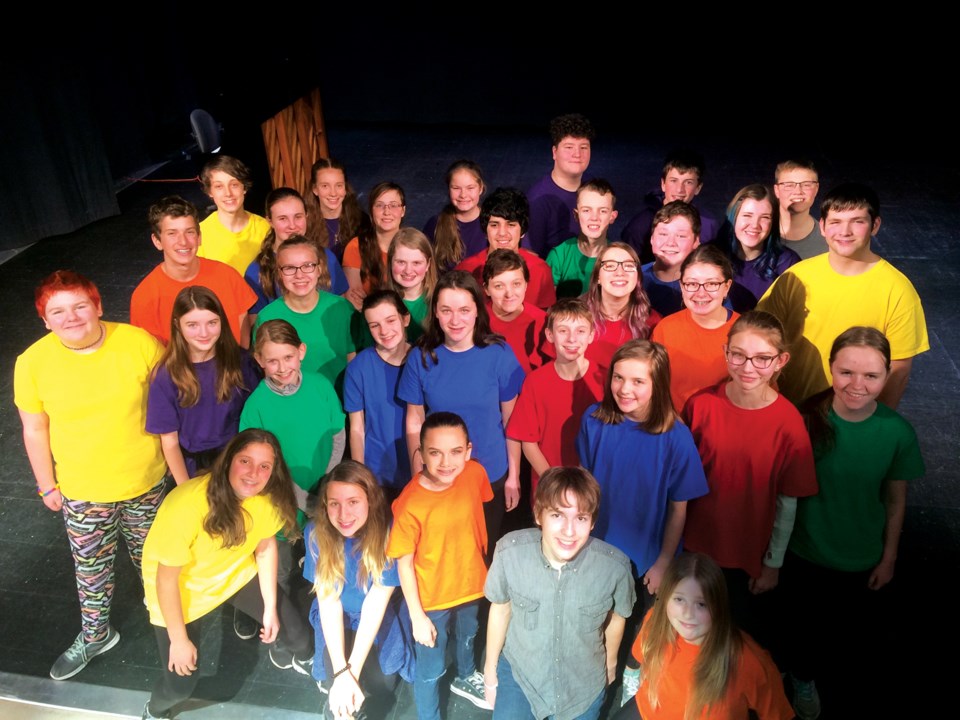 The cast of Joseph and the Amazing Technicolor Dreamcoat sport many colours in their rehearsal T-shirts.

With 38 eager, active students on stage at all times, rehearsing a musical production is a big job for a teacher and an accompanying pianist. Tom Kellough is on the piano and Sara Douglas is the teacher bringing life to Joseph and the Amazing Technicolor Dreamcoat that opens at the Chatelech theatre on Feb. 23.

“You’ve got to come alive. Right now!” she yells at the assembled grades 6, 7 and 8 kids – all in colourful T-shirts – who pack the stage awaiting their cues. They do come alive and show their musical theatre training learned since last September when rehearsals began.

The musical, with lyrics by Tim Rice and music by Andrew Lloyd Webber, is based on the “coat of many colours” story of Joseph from the Bible’s Book of Genesis. The show has little spoken dialogue; it is almost entirely song and dance. The familiar themes and catchy music have resulted in numerous stagings – Donny Osmond in the lead role toured with it – but still, it’s a big undertaking for a school production.

Though Joseph is the eleventh son of Jacob, he is his father’s favourite and he shows a talent for interpreting dreams and telling the future. This gets him into trouble with his brothers but it saves his life when in Egypt because he can correctly interpret the Pharaoh’s dreams. Joseph and the Pharaoh have major roles and there is also plenty of sweet singing from female soloists.

In addition to the performers, students act as stage managers and operate the lights and the sound for the play.

Douglas works hard to keep their choreography moving along. They had a little help in designing the movement from local dancers Ivana Capelletto and Heidi Riggs. Sylvain Brochu choreographed one of the numbers. Audience will be delighted with the Egyptian Bop, an upbeat song and dance that sounds like music from the ’50s, rather than biblical times along with jazz music, cabaret and country songs.

The SD46 Music Theatre Ensemble presents Joseph and the Amazing Technicolor Dreamcoat on Feb. 23 and 24, and March 2 and 3 at 7 p.m. at Chatelech Secondary School Theatre in Sechelt. Tickets are $10 at Laedeli in Gibsons and Strait Music in Sechelt.