Be a ‘nano-tourist’ in an imagined minuscule world

Artist Shannon Pawliw is immersing us in her imagination at her exhibition, Microscapes, which opened this week at Gibsons Public Art Gallery (GPAG).
Apr 8, 2021 10:04 AM By: Rik Jespersen Arts & Entertainment Writer 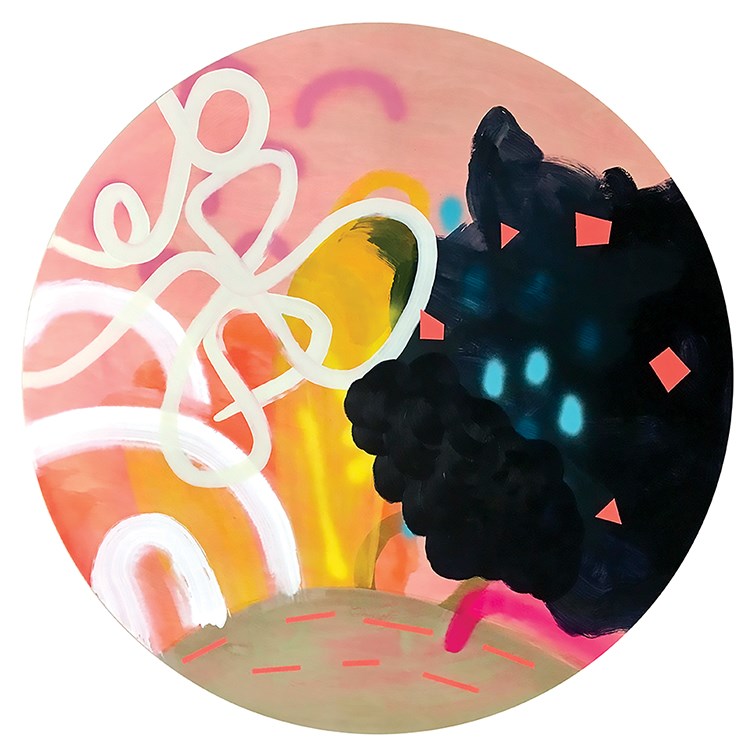 Artist Shannon Pawliw is immersing us in her imagination at her exhibition, Microscapes, which opened this week at Gibsons Public Art Gallery (GPAG). Part of what Pawliw is imagining in this series of paintings and 3-D creations is a sort of microbial carnival.

“If you were to shrink yourself, it’s what you might see if you were in that subatomic landscape and you went to an amusement park,” Pawliw told Coast Reporter in an interview.

As she added in her artist statement, “[t]his series of paintings portrays a fantastical and imagined world where one can fly, float, or soar through a diminutive landscape filled with microbes, bacteria, viruses, cells, and atoms… They allow the viewer to be a kind of ‘nano-tourist’ in a tiny world that … can only be seen using a microscope or particle accelerator.”

The paintings, many about four-feet-square, do not literally play on the contents of microscope slides. As Pawliw has dived into this world, she has envisioned something quite different, creating what she called “fantastic microbial cartoon characters,” purposely childlike in their execution.

“That’s always my headspace when I go into paint – I want to make marks that my four-year-old granddaughter would make, or that I might have made when I was four years old,” Pawliw said. “I want it to be a very childlike interpretation of these sometimes very serious topics, especially right now.”

By “right now,” of course, Pawliw is referencing lethal germs like coronaviruses, which with their distinctive spikes are increasingly a subject in art. But this exhibit wasn’t created with that pathogen in mind at all.

“I started this series well before COVID. I had the show secured [at GPAG] well over a year ago,” Pawliw said. “It’s just very interesting that it ends up landing during a year with everybody sort of fascinated with the microbial world.”

The dozens of works here also have each been named after a scientist recognized for their work in the realm of the minuscule. Most are not household names, but some are better known, such as Jonas Salk, Louis Pasteur, and Galileo Galilei. Yes, Galileo, the astronomer renowned for using lenses to look way out into the cosmos, also used them to look way down into the cellular world, Pawliw noted. “He made one of the first microscopes – before they were even called microscopes – using it to look at insect wings and all kinds of little things like that.”

In addition to the dozens of paintings on display, Pawliw has installed some exercise-ball-sized mixed-media spheres on the floor and other colourful creations hanging from bungee cords on the ceiling. She conceived them as creative playthings in the amusement-park theme, to be rolled around or tugged on. But she acknowledged that such objects are potentially vectors of infection during the pandemic, so they’re there to look at but, unfortunately, not touch.

Microscapes is on until May 2.