The new exhibit at the Sunshine Coast Arts Centre in Sechelt is a striking contrast to the previous show at the centre’s Doris Crowston Gallery, which was a selection of works by Roberts Creek painter Maurice Spira, spanning the nightmarish to the wa
Mar 20, 2020 6:00 AM By: Rik Jespersen 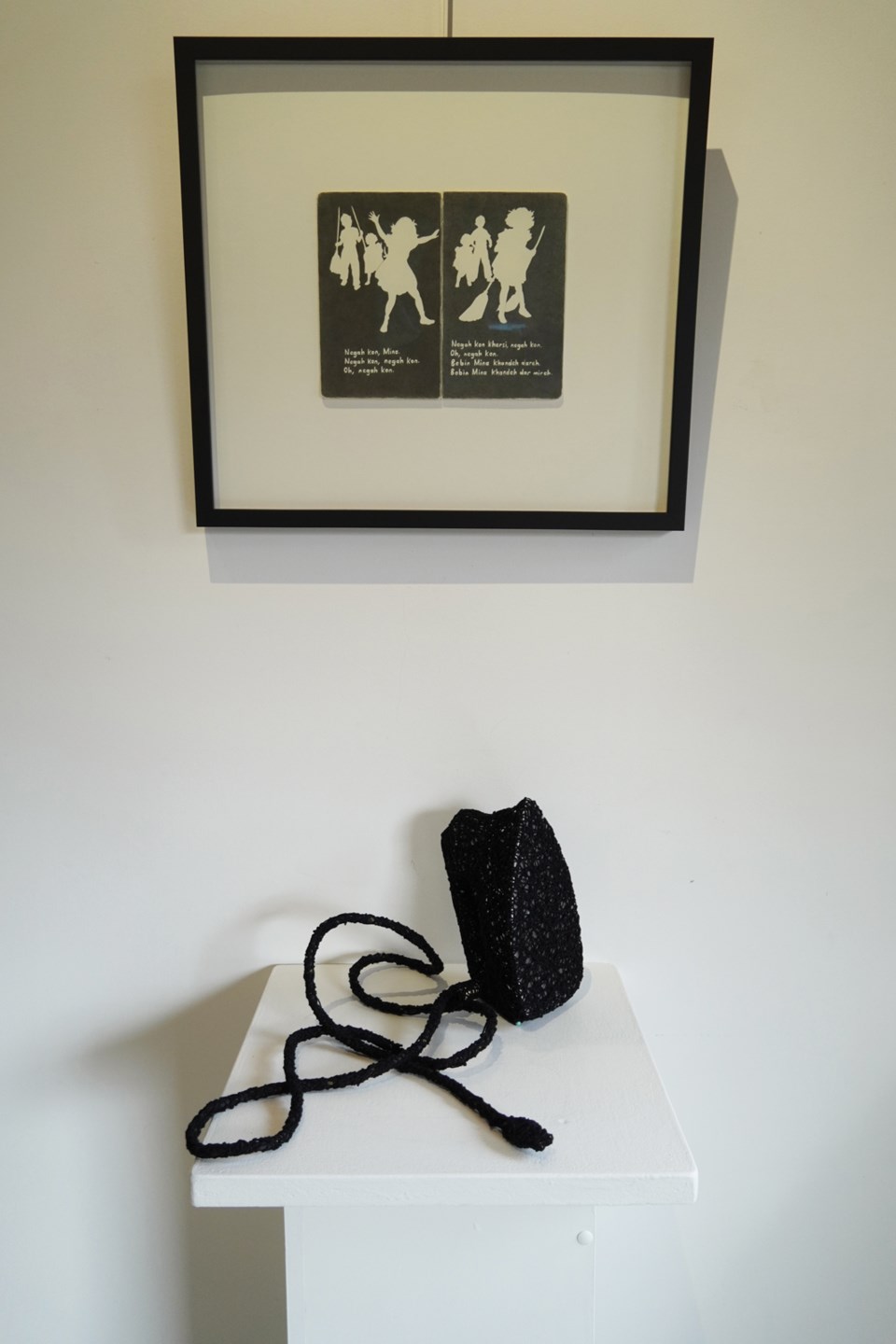 The exhibit includes a household iron carefully wrapped in black netting and one of the panels from the artist’s series on a Dick and Jane book.Rik Jespersen Photo

The new exhibit at the Sunshine Coast Arts Centre in Sechelt is a striking contrast to the previous show at the centre’s Doris Crowston Gallery, which was a selection of works by Roberts Creek painter Maurice Spira, spanning the nightmarish to the warmly rendered.

The relatively spare new exhibition, Thread, by Vancouver-based Iranian-Canadian artist Mehran Modarres-Sadeghi, also presents a spectrum, albeit black and white. It takes us from public school storybooks to intensely organic line drawings, and to other sets of curious lines – those sculpted onto everyday objects in nets of thick, black thread. What are we to make of all this? The series are takes on both global culture and the immigrant experience.

The silhouette prints Modarres-Sadeghi has created come from the 22-book Dick and Jane series, which were stories about a young, white brother and sister, read in North American elementary schools from the 1930s through the 1960s. They’re still used in schools elsewhere in the world. Modarres-Sadeghi, who grew up in Iran, has taken pages from the Grade 1 story We Come and Go and translated the text from English into a phonetic version of Persian, using the English alphabet rather than Persian script. Many of the toys that were illustrated in the English-language version were unknown to kids of the artist’s generation and have been conspicuously redacted.

“On other pages, a white picket fence is replaced by a tall brick wall, and a milk van is replaced by a motorcycle, as these were more common in Iran,” Modarres-Sadeghi said in an artist’s statement. “Working with notions of ‘third space’ or ‘the space in-between’ and the globalization of English, this work explores how the use of the hybrid language Persian-English affects an Iranian sense of identity in a globalized world.”

The set of six line drawings, from 40 to 27 inches square in size, from the series Lost, and Lost Gardens, look at a distance like furiously drawn sets of squiggles. On closer examination, they come writhingly alive as painstakingly drawn, ink or graphite on paper designs, deeply organic and absorbing. One can stand and look closely and appreciatively at these for some time.

Modarres-Sadeghi refers to the objects thickly covered in black thread as sculptures. They include, the artist said, “traditional Iranian objects, such as a copper tray and blue tiles, and modern objects from Western culture, such as Adidas shoes, and headphones.” The sculpting, and the subtle message, is in the wrapping.

“It aims to highlight the changes in cultural traditions and the influence of English and Western culture by presenting both traditional and contemporary objects together,” she said. “By obscuring, protecting, and wrapping the objects, it places them in the context of artistic objects.”

The reception and meet-the-artist event for this show were postponed due to the COVID-19 pandemic and not yet rescheduled. The exhibit runs until April 12.