When you sit in the tower lobby at the Sechelt Hospital and look up, you might notice an attractive artistic element curving around the ceiling. Better yet, walk up the lobby stairs and admire the Shain Jackson mural that hovers over the stairwell.
May 4, 2018 12:25 PM By: Jan Degrass 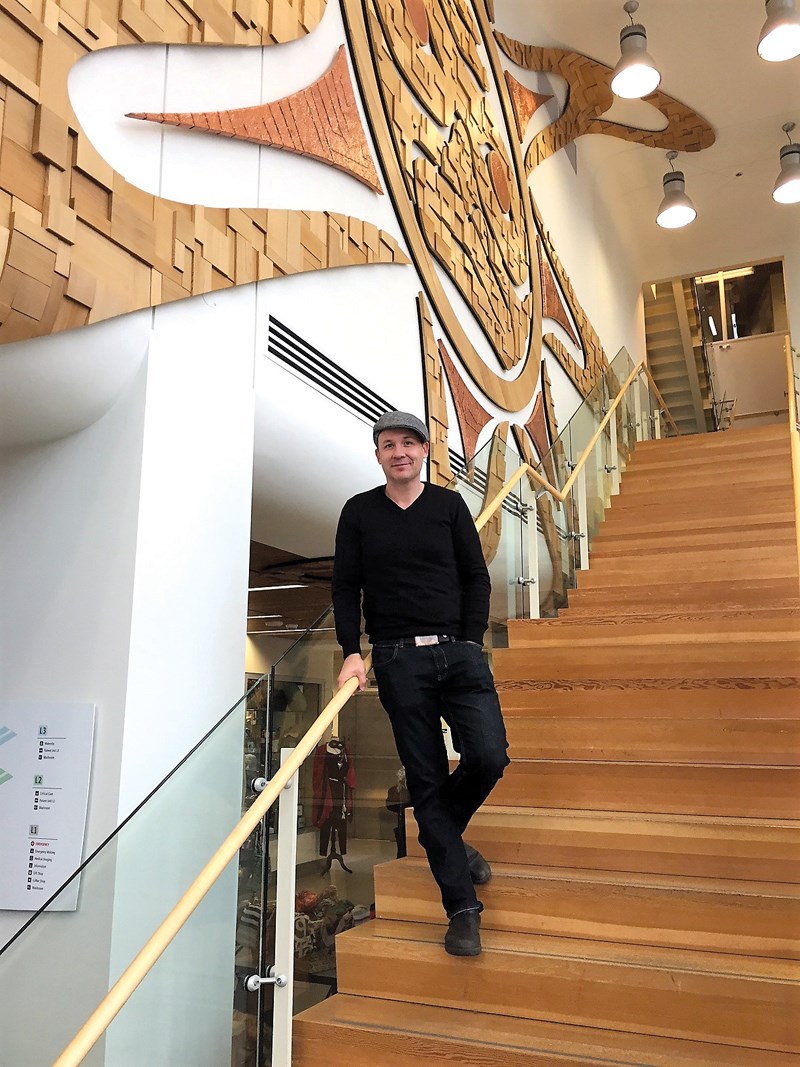 When you sit in the tower lobby at the Sechelt Hospital and look up, you might notice an attractive artistic element curving around the ceiling. Better yet, walk up the lobby stairs and admire the Shain Jackson mural that hovers over the stairwell. It’s huge – a sculptural artwork designed by the Coast Salish artist that is best viewed from outside especially at evening time when the lights of the building set off the giant carving in relief.

Titled Pulling Together, it was commissioned by Vancouver Coastal Health in 2012 and installed in 2013. It was the first step in the current hospital program of acquiring art.

“It was meant to be a centrepiece for that lobby,” said Jackson, “and it was lots of fun to carve.”

The process began with a collaboration; ideas were based on interviews with elders and cultural keepers of Coast Salish traditions. As the ideas developed, four young artists were chosen to work with Jackson on all aspects of the piece: Calvin Johnson, Mariah Paul, Irene Craigan and the late Summer August. The carved mural representation of the sun uses recycled fine-grained cedar pieced together, as well as copper and abalone shell, along with a depiction of four paddlers who represent the old Coast Salish teachings.

“We were always welcoming visitors,” said Jackson of his people. “We were always working together.” Jackson is currently working on developing his gallery, Spirit Works, in North Vancouver, an Aboriginal owned, operated and staffed company. He has also recently consulted on legal aspects of Indigenous art with Chief Justices in Ottawa in his role as a lawyer who has the perspective of an artist.

Spirit Works’ Pulling Together piece won a major international design award at the Academy for Design and Health’s World Congress, in the category of the Use of Art in Public Spaces, and it made the cover of World Health Design magazine.

Jackson writes in his Spirit Works website that the mural “embodied everything it was meant to represent around the ideals of cooperation, and building unity within the Sechelt Indigenous community and also between the Indigenous and non-Indigenous folks on the Sunshine Coast.”