Return of the warblers and other April characters

The weather has been spectacular with nary a cloud in the sky, temperatures above normal, and springtime is unfolding as it should.
Apr 22, 2021 10:07 AM By: Tony Greenfield 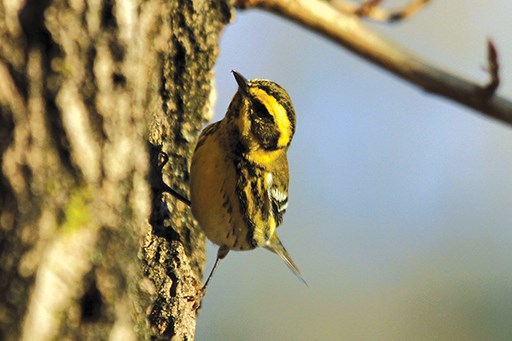 The weather has been spectacular with nary a cloud in the sky, temperatures above normal, and springtime is unfolding as it should. This is the time of year that gladdens the hearts of birders as they observe and listen to the return of the warbler family from points south. I have a big broad-leaf maple tree by my house and one of the defining events of my year is observing animated flocks of warblers foraging for insects among the maple blossoms. Often there are mixed flocks containing yellow-rumped, orange-crowned, black-throated gray and Townsend’s warblers, and sometimes ruby-crowned kinglets. Yellow-rumped warblers have been singing in the treetops for a month now, as the vanguard of the millions of their species are early arrivers. Orange-crowned warblers are unobtrusive and green-coloured with hard-to-see orange crown feathers, but they have a distinctive, loud song, often compared to running your fingers down the teeth of a comb. As I write this, I am listening to both these species singing in the Redrooffs Road sunshine.

A twice-yearly event on the Sunshine Coast is the passage of the flocks of geese, northward in April and south in October. CTV News reported that there was a record number of snow geese, 180,000, in Richmond this year, awaiting the unknown signal to start moving north to their breeding ground on Wrangell Island in Siberia. Their passage over the Sunshine Coast was largely confined to the period April 9-19 with flocks of hundreds passing day and night. Most of the flocks were snow geese but on the 15th I observed more Canada geese than snows. Question. Why do geese expend energy cackling constantly when they are on long, energy-sapping flights of thousands of kilometres? It seems counter-productive!

There has been the usual cast of other April characters appearing: goldfinches at feeders, large numbers of migrating golden-crowned and white-crowned sparrows, and our most-hated bird, the nest parasitic brown-headed cowbird. There was a record early black-headed grosbeak. On the water, significant aggregations of birds have been reported with 45 horned grebes and 140 red-necked grebes off Chaster Beach, 40 common loons off Roberts Creek, and 550 Pacific loons in Malaspina Strait. Scarcer migrants have been a few mountain bluebirds, a Say’s phoebe, a single Townsend’s solitaire (so far) and a western meadowlark. No rarities have been reported, but there is always May! To report your sightings or questions contact tony@whiskeyjacknaturetours.com or 604-885-5539. Good birding.