I have a correction to make about the photo in my previous column: Murray King, who was the boy in the photo, lived in the Chaster/King area for many years and said the Watson home was not on the corner but one property to the west along Honeymoon La
Jan 21, 2021 9:53 AM By: Gayle Neilson 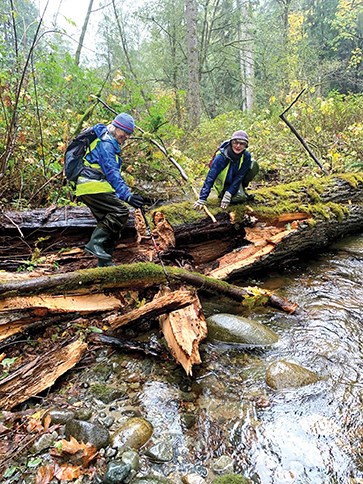 I have a correction to make about the photo in my previous column: Murray King, who was the boy in the photo, lived in the Chaster/King area for many years and said the Watson home was not on the corner but one property to the west along Honeymoon Lane (now known as Chaster Road). That house is long gone but the house on the corner, still there, was built and lived in by the Hicks family and then the Olsen family.

Ele Molnar of Sunshine Coast Homelessness Advisory Committee spoke to the January Elphinstone Community Association meeting and fielded many questions, including about the supportive housing development on School Road, funded by BC Housing, to be operated by RainCity Housing. She was thanked for the important work done by her organization. SCRD director Donna McMahon gave a report and there were questions about the Chapman Creek intake as well as concerns about road issues. Clint Budd discussed his outreach to neighbourhood associations, now extending to other community associations up and down the coast.

Streamkeeper co-ordinator Shirley Samples reported some good news about the 2020 salmon spawning season in her New Year’s email. The group has been tracking salmon for the past two years in four creeks: Chaster Creek, Roberts Creek, Langdale Creek and Malcolm Creek. Shirley said, “The numbers increased substantially in Roberts Creek and Chaster Creek! Also, the chum salmon that did return were notably large in size. The number of coho returns were less than 2019; we hope that number will increase as this species is important to our whole ecosystem but especially for southern resident orcas that depend on them.” She thanked all the streamkeepers for their volunteer efforts. More info at https://sunshinecoaststreamkeepers.com/

Finally, Dani Goyer from Winnipeg wrote Donna McMahon, who passed it along to me, that she is looking for someone in Elphinstone who blessed her family with some little elves following a major flooding event in 1997. Her mother, Susan Goyer, had told a CBC radio interviewer at the time that some of their family’s beloved handmade Christmas ornaments were lost in the flood. Dani says, “As a result of that interview the love poured in from B.C. in the form of all sorts of ornaments that were gifted to many families in the area... Among those ornaments were some little elves that someone made and sent from Elphinstone. My mom typed up the note that came with them and framed it along with two of the elves and it has been displayed by our family at Christmas ever since. My mom passed away in February, but the elves are still a part of our Christmas traditions.” Dani would like to connect with the person(s) who sent them to let them know how much those elves meant to her family. If you are or know that person, I’d be pleased to put you in touch with her. Contact me at: author.ggneilson@gmail.com