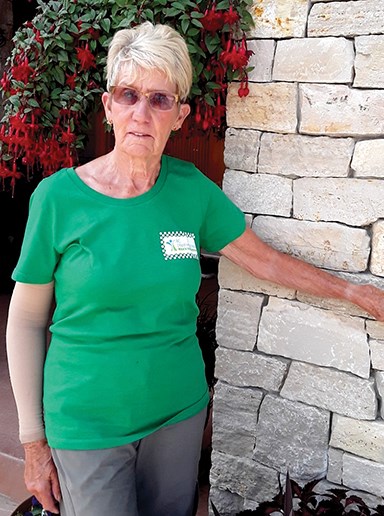 Based in Sechelt, Chandler is the president of the BC Lymphedema Association (BCLA), one chapter of a national volunteer-run group. She’s held the position for four years, and has decades of experience of living with lymphedema. It was her own experience of trying to get a diagnosis and then trying to find proper treatment that inspired Chandler to help others find and access early treatment.

Lymphedema is the buildup of lymphatic fluid in the body, which can cause swelling in limbs leading to pain, disability and related infections. There are several causes of the disease, including a genetic component that can affect people at any stage in life. Lymphedema can also be a side effect of cancer treatment, surgery or as a result of other bodily trauma.

“[T]he sooner you start managing lymphedema, the greater the chances of success of it not developing through stages,” Chandler said.

“It can really hold it at that stage and it doesn’t become too debilitating in your life. But if the swelling gets left for a long time, then the more swelling, the more damage happens.”

March 6 marks the sixth World Lymphedema Day for raising awareness of the disease. On March 5 and 6, the parliament buildings will light up with a blue and green displays to honour those who suffer from the disease, their caretakers and the efforts to raise awareness. The province’s proclamation signed by the attorney general and lieutenant governor acknowledges the gaps in research, education and effective treatment for the disease.

Last year, B.C.’s first lymphedema program opened at Vancouver General Hospital, aiming to bring surgical options for treating the disease to the province for the first time. A fundraiser for equipment has reached more than half of its $250,000 goal. Surgeries will only be able to start once the program has purchased the necessary equipment.

“We were very excited about that. And obviously, it offers more hope for people. But it’s still not a cure,” Chandler said of the surgical program. “It can help alleviate the symptoms, but people will still have to wear compression [clothing], even if they’ve had surgery.”

As for BCLA, the group’s goal is to educate and support those with lymphedema. For Chandler, her goal is to ensure that B.C. residents have funding and health-care coverage for lymphedema and that there be some kind of a formally recognized program.

Information, resources and virtual events can be found at www.bclymph.org. On March 6, anyone can join the annual celebration at 3 p.m. via Zoom.

Six educational webinars on subjects such as how to manage lymphedema and nutrition can also be watched throughout the month of March.