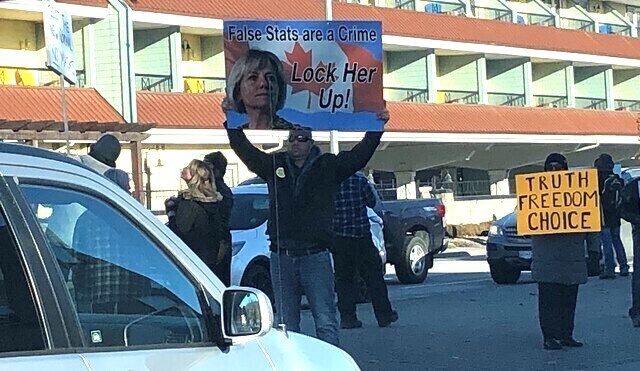 A man holds a sign at a protest against COVID-19 measures in Kelowna in December.Nicholas Johansen / Castanet

Health Minister Adrian Dix has condemned the personal attacks Dr. Bonnie Henry has faced online and at so-called “freedom rallies” across the province, calling such behaviour “unacceptable” and “disgraceful.”

Over the past several months, those who oppose B.C.'s public health measures to slow the spread of COVID-19 have ramped up their rhetoric online. Some who attend Kelowna's own weekly protest against COVID-19 measures bring signs that call Henry a “liar.” The organizer of the protest, David Lindsay, has repeatedly called for her arrest. Ironically, Lindsay has done two stints in jail himself for failing to pay his taxes.

In response to comments made by a vocal “anti-masker” in the Lower Mainland who advocated for Henry's death — highlighted in a recent News1130 article — Dix said he “condemns them utterly.”

Henry said the constant criticism from the so-called anti-masker crowd has been “incredibly challenging.”

“We have people who've been protesting outside our office and it affects me but it also affects my family, it affects the people that we work with and that's the part that I find hardest to deal with,” she said.

“I recognize that when people are in crisis, part of the way they respond or react is to lash out, to become angry, that is a reaction that is sometimes fed by certain groups, by certain media, social media posts, etc. It's not to condone it, but it's to recognize that the psychology of what we're dealing with leads some people to react to that way. And I do believe that it's our collective support for each other that helps mitigate the impacts of these things.”

She noted that provincial health officers across the country are dealing with similar issues, and they talk regularly and support each other.

Dix noted that his government and public health officials will not get everything right in responding to the pandemic, and it's “absolutely legitimate to disagree,” but “the kind of personal attacks of some is just completely unacceptable.”

“[Dr. Bonnie Henry] never loses sight of people in this pandemic. Regardless of the criticism, she continues to show compassion for everybody, every single person,” Dix said. “Regardless of one's view of what we're doing from a day-to-day basis, that is worthy of respect for an extraordinary human being in our province, and I think we need to have a slightly more respectful debate.”