Overdose deaths in B.C. reach 851 in first five months of this year

Vancouver, Surrey and Victoria continue to be hardest hit by drug deaths
Jun 29, 2021 11:22 AM By: Mike Howell
British Columbia has recorded its 15th consecutive month where more than 100 people died of a drug overdose, with 160 lives lost in May, according to a new report released Tuesday by the BC Coroners Service.

The death toll between January and May now stands at 851 people, the most ever reported in the first five months of a calendar year. The number of deaths surpassed the 704 for the same period in 2017, the previous record year.

“More than five years into this public health emergency, we continue to lose our loved ones, friends and neighbours at an almost unimaginable rate,” said B.C.’s Chief Coroner Lisa Lapointe in a news release.

“There is no way to measure the catastrophic impact that the loss of these lives have had on every community in our province. Today, I grieve with all those who have lost someone close to them as a result of this crisis.”

Toxicology results indicate the variability of the drug supply continues to pose a threat to drug users, with 27 per cent of the samples tested in April and 25 per cent tested in May containing extreme concentrations of fentanyl.

The coroners service describes “extreme” as more than 50 micrograms per litre, the highest rates reported since at least the beginning of 2019.

Carfentanil, a more potent analogue of fentanyl, has now been detected in 75 deaths in 2021 after being identified in 65 investigations in all of 2020.

Additionally, 60 per cent of returned tests in May were positive for benzodiazepines, which the coroners service says creates “significant life-saving challenges for first responders when used in combination with opioids.” 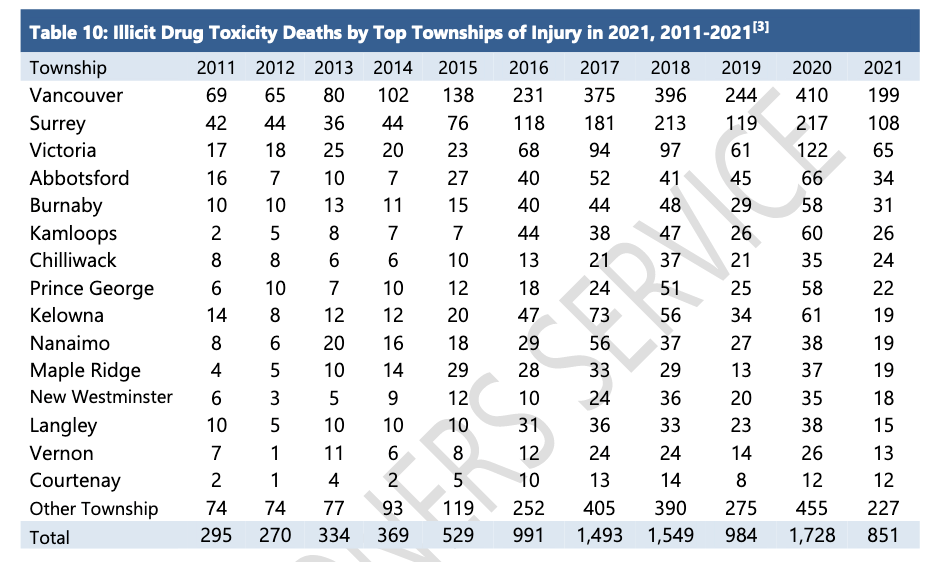 Vancouver (199), Surrey (108) and Victoria (65) continue to be the city’s hardest hit by the crisis, with Abbotsford, Burnaby, Kamloops, Chilliwack and Prince George all recording 22 or more overdose deaths between January and May.

Courtenay at 12 deaths has already equaled the total number of deaths for all of 2020.

“As the COVID-19 pandemic begins to wind down, we must turn our attention to combating B.C.'s other public health emergency with the same sense of urgency,” Lapointe said.

“We need to ensure that safe alternatives to toxic illicit drugs are available throughout the province, and that we are taking meaningful steps to reduce stigma and offer substance users access to the supports they need and are seeking.”

The release of the coroners service report was followed by a statement released by Minister of Mental Health and Addictions, Sheila Malcolmson, in what has become a predictable monthly exercise as the overdose crisis persists.

“Our government will continue expanding life-saving resources across the continuum of care, from prescribed safer supply to more treatment beds,” Malcolmson said. “Going forward, we are deepening our investment in people and innovative solutions to turn this crisis around.”

The minister’s statement included a list of “actions” government has taken to address the crisis, including “a historic investment” of $500 million in the 2021 budget for mental health and substance use over the next three years.

The ministry said it will have more to share about specific mental health and substance use investments in the coming weeks and months.

So far, initiatives have included expanding treatment and recovery options, allowing nurses to prescribe medication for opioid use disorder and increasing the number of outreach teams to connect with users

In 2020, more than 270,000 Naloxone kits were shipped and more than 98,000 were reported as “used” to reverse an overdose since the program started. A total of 38 overdose prevention and supervised consumption services now operate in B.C. under health authority direction.

B.C. is also moving forward with an application to the federal government for a Section 56 exemption to the Controlled Drugs and Substances Act to decriminalize personal possession of drugs.

On June 1, the City of Vancouver forwarded its own application for decriminalization to Health Canada. B.C.’s solicitor general has asked police forces in B.C. to no longer pursue criminal charges for people with personal possession of drugs.