A new coalition of hunters, environmentalists and outdoor enthusiasts have come together to call on the B.C. government to enact endangered species law and boost funding to threatened fish and wildlife
May 13, 2021 2:00 PM By: Stefan Labbé 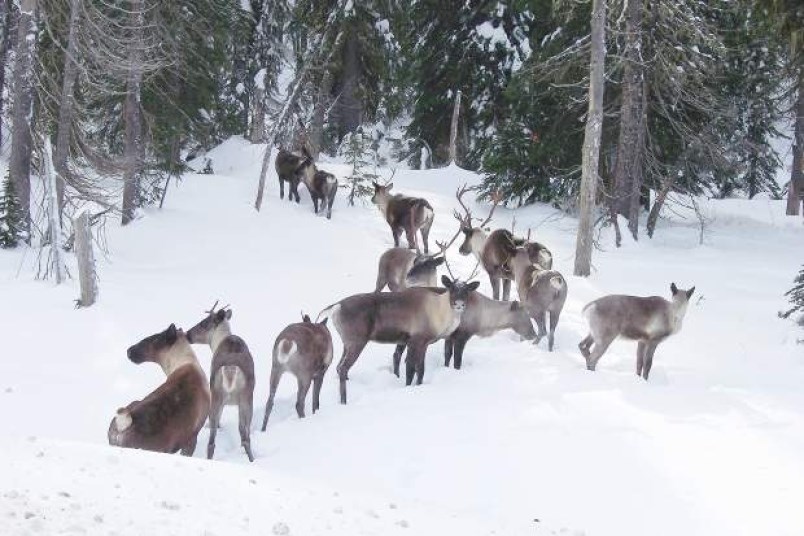 Southern Mountain Caribou are one of over 1,800 animal species in B.C. at risk of extinction. (via Nature Conservancy of Canada)

A group of 25 organizations — from fly fishers and big game hunters to mountaineers and butterfly enthusiasts — are calling on the B.C. government to step up funding and create a new governance model to protect the wild animal populations on the brink of collapse.

A spokesperson for the newly formed Fish, Wildlife, and Habitat Coalition said a growing human population, the knock-on effects of resource extraction and lack of investment in habitat conservation have pushed many species to the brink of extinction.

“In a generation of people, B.C. has gone from being a global leader in fish, wildlife and habitat conservation, to a landscape which can be characterized as at-risk, endangered and extirpated,” said Jesse Zeman of the BC Wildlife Federation in a written statement.

He later added: "If we continue down on our current path, we won't have anything left."

Zeman said that while there was a small bump in funding for wildlife in the latest provincial budget, B.C. remains far behind any other jurisdiction in North America once you consider its size, level of biodiversity and population. As an example, Zeman said Idaho is nearly a fifth the size of British Columbia, but the state spends more per person, per square kilometre and per species than B.C.

"Just to make the baseline, you're going to need north of $200 million," he said, a roughly four-fold increase in current funding.

The coalition claims it represents 273,000 British Columbians and more than 900 businesses across the province.

"We are bringing together more groups than at any point in B.C.'s history," said Zeman, pointing to the unlikely collection of hunters and conservationist groups. "We're going to put aside things that have pulled us apart in the past. The reality is, we all want fish wildlife and habitat."

B.C. is already home to over 1,800 animal species at risk of extinction. In a 2017 mandate letter to the Minister of the Environment and Climate Change Strategy, Premiere John Horgan directed the minister to “enact an endangered species law.”

But in 2019, Horgan told the Narwhal’s Susan Cox, “There’s no significant species-at-risk legislation on the docket for the foreseeable future here in B.C.,” prompting a swift backlash from the scientific community.

According to the ministry’s website, the legislation remains “under development.”

Meanwhile, more species are added to the at-risk and endangered lists on a regular basis. Last week, the Committee on the Status of Endangered Wildlife in Canada reported that of the 26 species it had recently assessed, 15 were found to be threatened by climate change.

That included the “attractive” Edwards Beach Moth, found on the windswept beach dunes of Vancouver Island. While local volunteers have kept invasive vegetation at bay, it was added to the endangered list because of threats from intense storms and rising seas, which hammer the upper beaches where they live, according to the committee.

And earlier this week, the Splatsin First Nation sounded the alarm over the Southern Mountain Caribou, an iconic species whose precipitous decline in recent years has led to several locally extirpated herds and placed it at risk of extinction.

In a recent government-sponsored study published in Conservation Science and Practice, researchers found that any short-term recovery action would only delay the extinction of the caribou species — unless its habitat is protected.

—With files from Darren Handschuh