She was the ‘Prince George-Mt. Robson’ area ticket winner from March 19, 2021

The McBride resident won $13 million from the March 19, 2021, Lotto Max draw, the only person in all of Canada to correctly match the seven numbers in the jackpot.

Early that morning, the BC Lottery Corporation (BCLC) posted the winning numbers to its website, citing the ticket was purchased in the ‘Prince George-Mt. Robson’ region.

Manning bought the ticket from the Husky/Esso station in McBride on NE Frontage Road, where she's a known regular.

“I went to the Husky that I always go to and the retailer knows who I am,” she explained in a release today (April 1).

“I checked the ticket on the self-checker and suddenly the amount appeared across the screen. All I said was ‘No!’ I just didn’t believe it and kept saying ‘No!’ to myself. I had to have the retailer check the ticket on his machine.”

BCLC also spoke with Amber Bhaskar, the lottery retailer at the McBride Husky/Esso, who was behind the counter when Manning scanned her ticket and saw she won $13 million.

“When Tammy validated her ticket… she was about to fall down,” Bhaskar said.

“She’s a loyal customer since we moved here – it’s really happy to see somebody winning from the local town.” 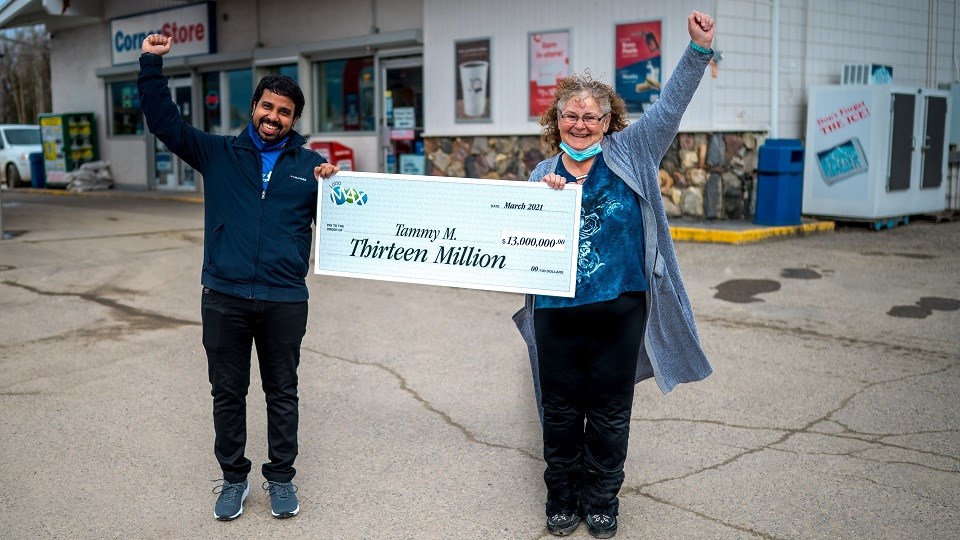 Manning says she’ll never ever forget her big payday as she’s plans to get a tattoo of ‘March 19, 2021,’ on her arm by her son, who’s also a tattoo artist.

Manning says, after planning to spend the $13-million cheque for herself and her partner, she’s also going to gift some dollars to her family.

“It feels so good that I’m able to help and do something good with it. This will change my life and it means I can retire and can help those close to me.”

Manning explains she plans to pay off her house for her first expenditure from the $13-million cheque, then buying her and her partner a sailboat and property in the Caribbean.

Someone is holding a $73K-winning lottery ticket purchased in Prince George
Feb 8, 2021 8:35 AM
Comments