Editorial: A future for Lady Rose

History buffs and mariners of all stripes will be thrilled to learn that Sechelt’s Clayton family has acquired the last of the Union Steamships with the intent of restoring her as a public asset.
Oct 3, 2019 10:16 AM By: John Gleeson 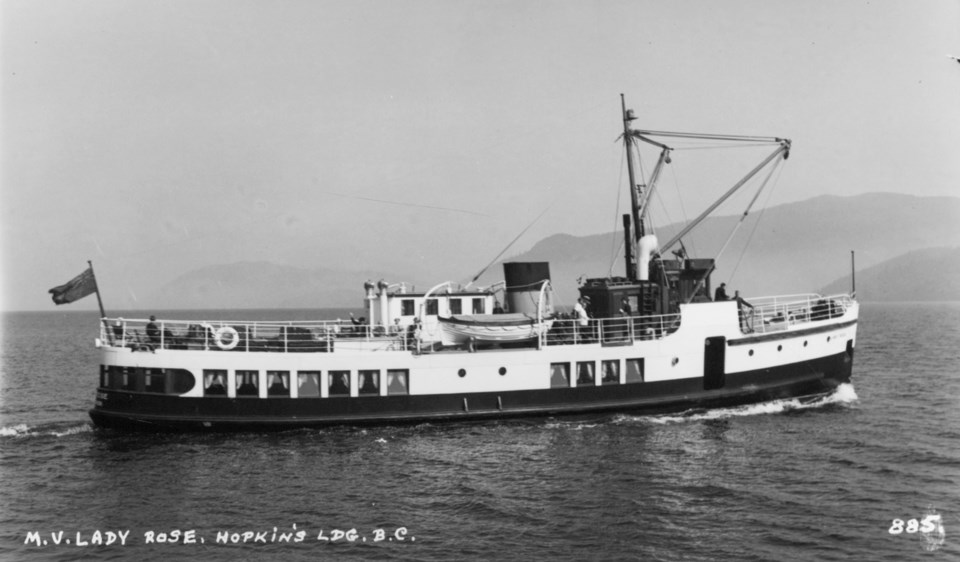 The Lady Rose in service near Hopkins Landing in the 1930s.Photo #3678, Courtesy of Sunshine Coast Museum & Archives

History buffs and mariners of all stripes will be thrilled to learn that Sechelt’s Clayton family has acquired the last of the Union Steamships with the intent of restoring her as a public asset.

While their plans for the Lady Rose are yet to be finalized, the idea of turning her into a public exhibit in Sechelt, either on land or water, and establishing a museum to celebrate the history of the Union Steamship era, has enormous potential to enrich B.C.’s cultural life – and the Sunshine Coast would be at the centre of it.

Dick Clayton, the driving force behind the project, does not exaggerate when he compares the importance of Union Steamships in the development of the B.C. coast to the role played by the railways on the Canadian Prairies. From its founding in 1889 to well into the 1950s, the company provided a vital supply link to otherwise isolated logging, fishing, farming, mining and First Nation communities. The Union Steamship fleet carried industrial freight, consumer goods, mail and people.

It also brought tourists. Seeing the potential of running excursionists up from the city, the company entered the resort business in 1917. It bought land with tourist amenities in Selma Park and Bowen Island and began marketing Sechelt and Pender Harbour as the “Gulf Coast Riviera” and the “Path of Sunshine and Sea Charm.” On the Howe Sound side, the 225-ft. Lady Alexandra carried up to 1,400 passengers and was Vancouver’s premier excursion vessel, serving Bowen Island and featuring twice-weekly evening dance cruises, with summertime calls to Gibsons Landing.

The Union Steamships have been the subject of numerous books and there is no shortage of fascinating sea yarns and colourful characters in the company’s history. There were also disasters. The 120-ft. Capilano I was wrecked off Savary Island in 1915. The 156-ft. Cowichan sank in the fog near Sechelt on Dec. 27, 1925 after she collided with the converted minesweeper Lady Cynthia. In the only accident involving loss of life, the top-heavy 126-ft. Cheslakee sank beside the dock at Van Anda on Texada Island on Jan. 7, 1913. The official death toll was seven, but witnesses claimed that 11 loggers who weren’t on the passenger list also perished in the hold. According to one account, two women school teachers drowned because they were too modest to be seen on deck in their nightgowns.

The 105-ft. Lady Rose was one of the smaller Union Steamships and the last one built for the company. Her only recorded mishap was a close call in March 1950 when she blew a cylinder off Merry Island and drifted for hours in a snowstorm, almost as far as Nanaimo. Her Howe Sound run was interrupted when she was pressed into service to transport freight and troops during the Second World War.

Now she’s being prepped for a very different mission – preserving the memory and history of Union Steamships. By doing so, she could draw a steady stream of visitors to the “Gulf Coast Riviera” in the years ahead. Who says history can’t repeat itself?