World Rugby looks set to postpone the 2021 women's World Cup to next year, citing uncertainty due to the global pandemic.
Mar 2, 2021 3:22 PM By: Canadian Press 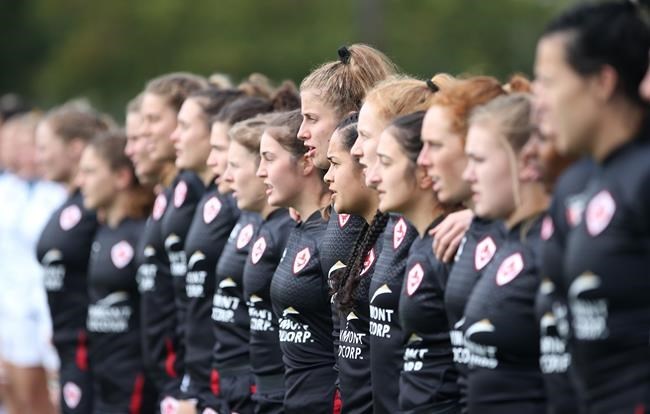 World Rugby looks set to postpone the 2021 women's World Cup to next year, citing uncertainty due to the global pandemic.

The recommendation will be considered by the Rugby World Cup board and World Rugby executive committee on March 8 and 9, respectively. Rugby Canada chair Tim Powers expects the "forceful recommendation" to become a reality then.

The 12-country tournament was slated to run Sept. 18 to Oct. 16 across three match venues in New Zealand.

"In recent weeks, through discussions with our key partners in New Zealand Rugby and the New Zealand government, it's become clear that we do not have the level of certainty we need to be able to collectively deliver the best environment for all teams to be at their best," said Alan Gilpin, World Rugby's interim chief executive.

"Rugby World Cup 2021 is the pinnacle of women's rugby. We're committed to providing the best conditions for the players and teams to prepare fully and to compete at their best in the tournament. Postponing the tournament to next year provides the best opportunity to do that.

"Putting it simply, due to the ongoing challenges of the pandemic, it's too difficult to guarantee adequate preparation time for all teams in advance of their arrival in New Zealand and during their time in New Zealand."

It's another blow for the third-ranked Canadians, who have not been together since the Can-Am Series against the U.S. in November 2019. Many have moved overseas to find playing time to prepare for the ninth edition of the World Cup.

"I can only imagine they're disappointed," said Powers. "Look, they're all very smart, capable people. They'll understand the world in which we live. But it's hard to have something that for many is a career moment stripped away and we have a good team. So I can't imagine they're anything but disappointed. We're disappointed for them and hope we can get things back to normal soon."

While World Rugby did not offer dates in 2022 for a rescheduled tournament, Powers said he would expect a "similar window."

"It's a heartbreaking decision, it's a disappointing decision. Sadly in COVID, we've all become accustomed to these sorts of outcomes," said Powers.

Pushing the tournament back is also a setback for many who hoped the latter months of 2021 would mark a return to normal, especially in New Zealand which has worked hard to keep the virus at bay.

"Ultimately it is up to the host county and to World Rugby and you have to respect that decision," said Powers. "New Zealand had been such a shining example of things that were doable. But as with every other country in the world, as it deals with the pandemic the only certainty about the pandemic is the uncertainty that it brings.

"So is the case here unfortunately."

The Canadian women were slated to open the tournament on Sept. 17 in Whangarei, New Zealand, against an Asian qualifier before taking on the sixth-ranked U.S. and a European qualifier.

The Canadians have not been together since beating the Americans 19-0 and 52-27 at the Can-Am Series in November 2019 in California. The U.S. won when they met in the summer of 2019.

Seven teams qualified directly for the World Cup by virtue of finishing in the top seven at the 2017 tournament in Ireland: champion New Zealand, runner-up England, bronze medallist France, the U.S., Canada, Australia and Wales.

In addition to the Asia and Europe qualifiers, a final team will come from a world repechage.

The 2021 tournament marks the first World Cup for the women in the Southern Hemisphere.

Drawn in a pool with New Zealand in 2017, Canada finished fifth.