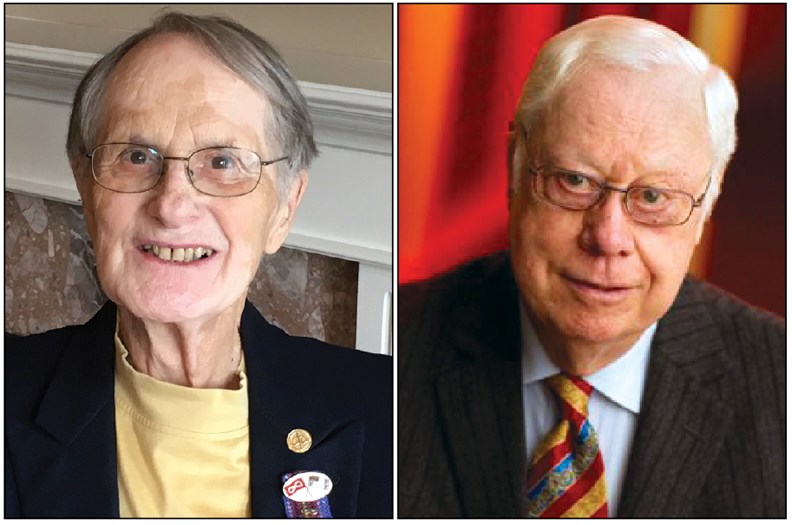 Retired lawyers George Goulet (left) and Philip Jones have been recognized by the Law Society of B.C. for 50 years as members.

Two retired lawyers from the Sunshine Coast were awarded with certificates from the Law Society of B.C. last month, in recognition of 50 years as members.

George Goulet, 83, and Philip James Jones, 81, were presented their awards on May 25 at a law society luncheon held at the Fairmont Hotel in Vancouver.

Jones started practising law in 1967 in Vancouver, and over the years he spent time with three different law firms, mainly focusing on business law and international trade.

Early in his career, however, he was called to be a judge in Vancouver Provincial Court.

“There was a backlog in the courts, and they appointed a number of short-term judges to clear up the backlog, and they asked me if I would be willing to do it,” Jones said.

He agreed, and the three-month posting ended up lasting six months, during which time he was the sitting judge for several criminal cases.

At the end of that posting, Jones decided to stop being a trial lawyer and took up company law and business practice instead.

While Jones spent his 50 years practising law in Vancouver, he was quite familiar with the Sunshine Coast, having driven it several times to help out lawyers in Powell River. “They only had two lawyers in Powell River – one was a judge and the other was a prosecutor – so I would go up there as defence counsel,” Jones said.

He was dedicated to his career and said he thought he’d die at his desk before taking to retirement.

“I almost did,” Jones said. “I had a massive heart attack two years ago and a quadruple bypass and a new valve and then I decided that I better retire.”

Retirement led Jones and his wife to the Coast, where they’ve now settled in Davis Bay.

Goulet practised law first in Winnipeg for eight years before moving to West Vancouver in 1967 with his wife Terry and their five children. He was called to the bar in B.C. that year and practised in West Van until 1977 when he moved to Calgary and was called to the Alberta bar.

In 1990 Goulet obtained a Master of Laws degree from the University of Toronto, where he studied advanced constitutional law. He continued practising until 1995 when he and his wife retired to the Coast and started researching and writing books based on law and its effects on the Métis people as well as memorable events in Métis history.

The work was a marriage of Goulet’s time spent as a lawyer and his Métis heritage.

He recalled a funny story from his early years in court. While representing a client who was charged with indecent exposure in a small town in Manitoba, Goulet heard an interesting ruling from the sitting judge.

“Basically he said ‘Jake, I’m finding you not guilty, but if you ever do this again I’m going to send you to jail,’” Goulet recalled, noting the name “Jake” was made up to keep the identity of his client confidential.

He enjoyed his time in court but had to give it up early on in his career due to a hearing problem that made it difficult for him to follow court proceedings.

He now uses his skills to help make sense of laws that will affect the Métis.

“I, with my wife, who is a retired legal editor, we specialize in the Métis and we write articles for the Vancouver Métis Citizen Society,” Goulet said.

“Every once in a while a case comes down that’s been decided by the Supreme Court of Canada that affects the Métis people and then we analyze it and write articles.”

Goulet and his wife Terry have also published several books on the Métis and their history and have been called “prominent Canadian historians” for their efforts.