UPDATED: Ferries says travellers ‘may not be telling the truth’ about resident status 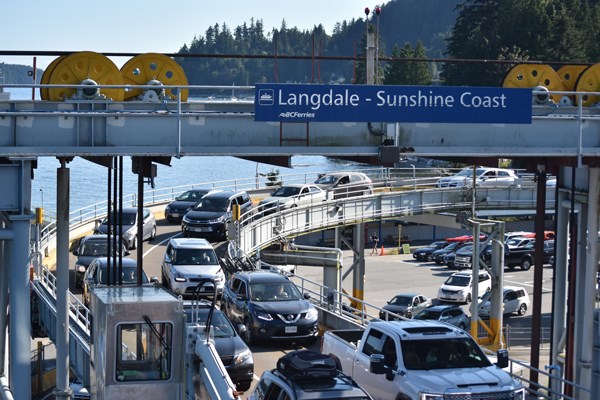 Despite additional sailings and assurances from BC Ferries that they have the capacity to meet summer travel demands, overloads are still commonplace on the Langdale-Horseshoe Bay run – and Sunshine Coast residents are becoming increasingly vocal in expressing their frustrations.

One of the biggest targets for complaints recently has been how BC Ferries is handling the province’s ministerial order directing it to give residents priority, along with shipments of essential goods and essential workers travelling to and from their jobs.

Mumford said it doesn’t seem to be resolving the issue and it’s put BC Ferries staff in the position of trying to deal with “very irate people.”

Collins said it’s been a challenge to balance the ministerial order on resident priority with the need for coastal communities to start opening up to tourism to restart their economies.

“It has become a serious issue on [Route 3] and other routes,” Collins said.

“Resident priority loading means we make all reasonable efforts to get a resident on the sailing. However, it doesn’t mean we bump reservations or essential goods or workers from the ship for a resident.”

Collins said BC Ferries is going to continue using the honour system, even though they are finding “some travellers may not be telling the truth about their status.”

“We believe checking everyone’s ID would create greater pressure on the check-in process and uncontrollable waits outside the terminal during busy periods,” Collins said. “BC Ferries is not an enforcement agency so we ask for your honesty and your patience with our employees.”

Powell River – Sunshine Coast MLA Nicholas Simons said with BC Ferries unwilling or unable to come up with a system to properly check resident status, he’s asking the government to change the ministerial order to remove the direction to give priority to residents and replace it with a requirement to give priority to people travelling for medical appointments.

“There’s been a major impact on both tourists and residents who are all frustrated by a system that isn't working. But the people who suffer most are the people booked for medical appointments, or who are being rebooked for their surgical procedures as the Ministry of Health tries to deal with the backlog,” Simons told Coast Reporter. “It's a terrible system, and until we can get a better system, [let's] ensure the medical travellers get on.”

Sechelt council calls on province to push for BC Ferries service improvements
May 6, 2021 5:42 PM