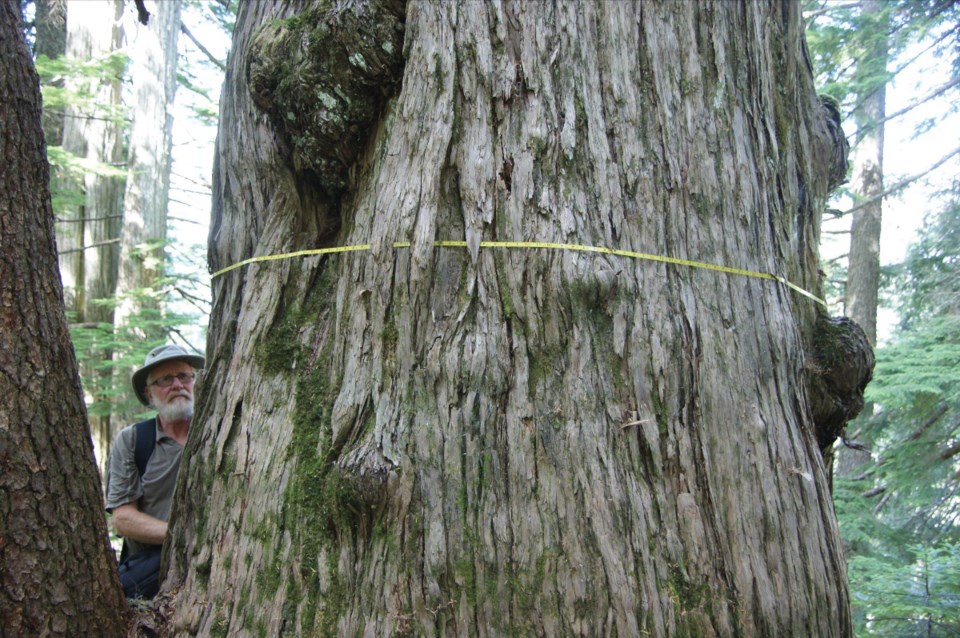 Sierra Club BC has joined Elphinstone Logging Focus (ELF) in its campaign to save a cutblock in the Dakota Valley that they say is home to “the oldest living trees in Canada.”

The BC Timber Sales (BCTS) cutblock, located 9.5 kilometres from Roberts Creek on Mount Elphinstone, is scheduled for auction in spring 2020. The two groups are calling on the provincial government to direct BCTS to cancel the sale, since the area contains stands of centuries-old cedars. One yellow cedar is dated at 1,036 years old, they say, based on tree coring conducted in 2014.

BCTS, however, says the cutblock’s legacy trees – described as trees that are “exceptionally large and old” – already have a protected status.

“For Timber Sale Licence A87126, legacy trees are protected as per BCTS’s best management practices for legacy trees,” the provincial agency said Thursday in an email to Coast Reporter. “BCTS staff also worked collaboratively with the Squamish First Nation to exclude trees from harvest plans that were of cultural interest to the Squamish Nation.”

BCTS noted that since the timber sale isn’t planned for auction until spring 2020, “exact size and boundaries are still being refined.”

The two conservation groups said in a Feb. 21 news release that the cutblock area “contains hundreds of red and yellow cedar trees that could qualify as coastal legacy trees and monumental trees under BCTS’s own guidelines for best management practices, considering their age, size and cultural significance. The area is also known to have a high density of black bear den sites.”

Yellow cedars are among the oldest living trees in the world due to their disease resistance and tendency to grow in sub-alpine zones where they are not subject to forest fires, the release said. “The oldest recorded tree in Canada was a yellow cedar that grew in the Caren Range on the Sunshine Coast before it was felled by loggers in the 1980s. It had a ring count of 1,835 years.”

BCTS says in its best management practices guidelines that legacy trees “selected for retention will often be used to anchor retention patches large enough to protect the integrity of the legacy trees and to protect workers operating in the vicinity. It is anticipated that a majority of legacy trees will be retained within areas that will normally be set aside from harvesting… However, despite best efforts, it is also recognized that it may not be possible to retain all legacy trees.”

Operational factors that are considered in deciding whether to retain a legacy tree include worker safety, operational constraints, windfirmness of the tree, known First Nations’ interests based on consultation, and local abundance of legacy trees.