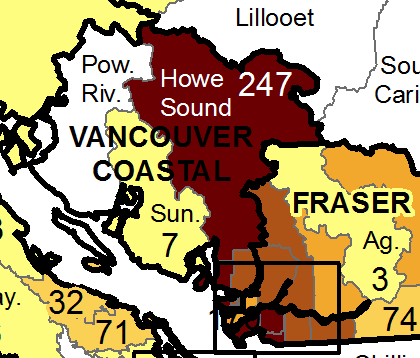 Seven people tested positive for the virus from March 21 to 27, according to data released by the BC Centre for Disease Control (BCCDC). The week prior, the agency reported two confirmed cases.

Case counts have hovered in the low single digits since the middle of January, when 11 cases were confirmed over a seven-day period.

The latest upate showed Powell River with zero new cases between March 21 and 27, while cases shot up to 247 in the Howe Sound local health area, which includes Pemberton, Squamish and Whistler.

Because of high transmission rates at the resort town of Whistler, Vancouver Coastal Health (VCH) has once again begun sharing data specific to that town.

In a March 30 update, VCH said 218 cases were confirmed in Whistler between March 21 and 28, making up the majority of the Howe Sound local health area’s weekly case count.

Since the start of the year to March 28, 1,120 cases have been confirmed in Whistler.

“The reported cases continue to be among young adults who live and work in the Whistler community. The most common location for transmission also continues to be in household settings and social gatherings,” said the update.

By comparison, the BCCDC reported 66 cases on the Sunshine Coast between Dec. 27 and March 27.

The immunization program, meanwhile, has been continuing at pace on the Sunshine Coast, with 1,669 people vaccinated at the Gibsons and Sechelt clinics on March 30 and 31, according to the Sunshine Coast Division of Family Practice.

The spread of mutant strains of COVID-19 continues to be a concern because they are thought to spread more easily, and have been linked in B.C. to causing an increase in intensive care visits among younger people who have been admitted to hospital.

– With files from Glen Korstrom