Multi-use path to be dropped from Gospel Rock trail plan

Gibsons council has voted to abandon plans for a multi-use path on the Gospel Rock lands near Gower Point Road in light of concerns about the possible impact on ecologically sensitive areas.
Oct 7, 2020 1:46 PM By: Sean Eckford 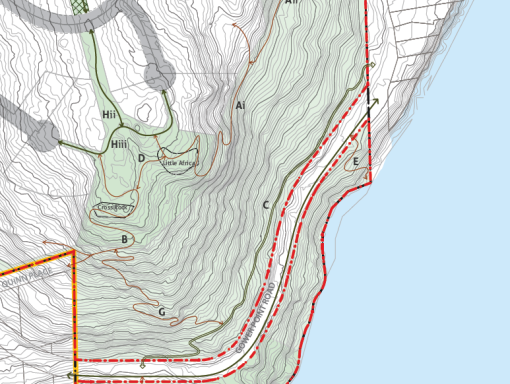 Gibsons council has voted to remove a multi-use path along the slope above Gower Point Road (marked “C”) from the draft trail plan for Gospel Rock after concerns raised by conservation groups.

Gibsons council has voted to abandon plans for a multi-use path on the Gospel Rock lands near Gower Point Road in light of concerns about the possible impact on ecologically sensitive areas.

The path, to be cut into the slope above Gower Point Road, was negotiated as a community amenity from the developer and was proposed as a way to improve cycling and pedestrian safety on the narrow road.

Two groups – the Sunshine Coast Conservation Association (SCCA) and the Land Conservancy of B.C. (TLC) – raised concerns about the impact of the path earlier this spring. Both groups will help administer the covenants to protect much of the land owned by Greenland Homes.

They said building a path to a standard that would allow for cycling would “cause a tremendous amount of impact to the landscape.”

Mayor Bill Beamish brought a motion forward at the Oct. 6 council meeting to have planning staff draft a report on “the process and implications” for cancelling the multi-use path plan and to look at “alternative measures” to improve bicycle and pedestrian safety on Gower Point Road.

After some debate, council went with slightly stronger wording to confirm that it intends to abandon the multi-use path idea and amend the development agreement to remove it from the concept plans.

Coun. Stafford Lumley said the TLC and SCCA should be left to finalize the covenant details with a mind to what’s best for protecting the area without unnecessary interference from the Town, noting that if there’s one thing people know, it’s “how much people in the community want to protect Gospel Rock.”

“To try to force something down both sides’ throats just so somebody can ride a bike – I just don’t agree with that at all,” he said.

Coun. Aleria Ladwig said dropping the multi-use path from the plan was “a no-brainer.”

“After all the years of controversy that’s gone into developing this site, the last thing I want to see is us blow this whole thing up over a trail,” she said. “If [the path] is such a sticking point, remove it.”

During the public Q&A at the close of the meeting, Dan Bouman of the SCCA thanked council for agreeing to abandon the multi-use path and commented on the good working relationship the conservation groups have with the developer.