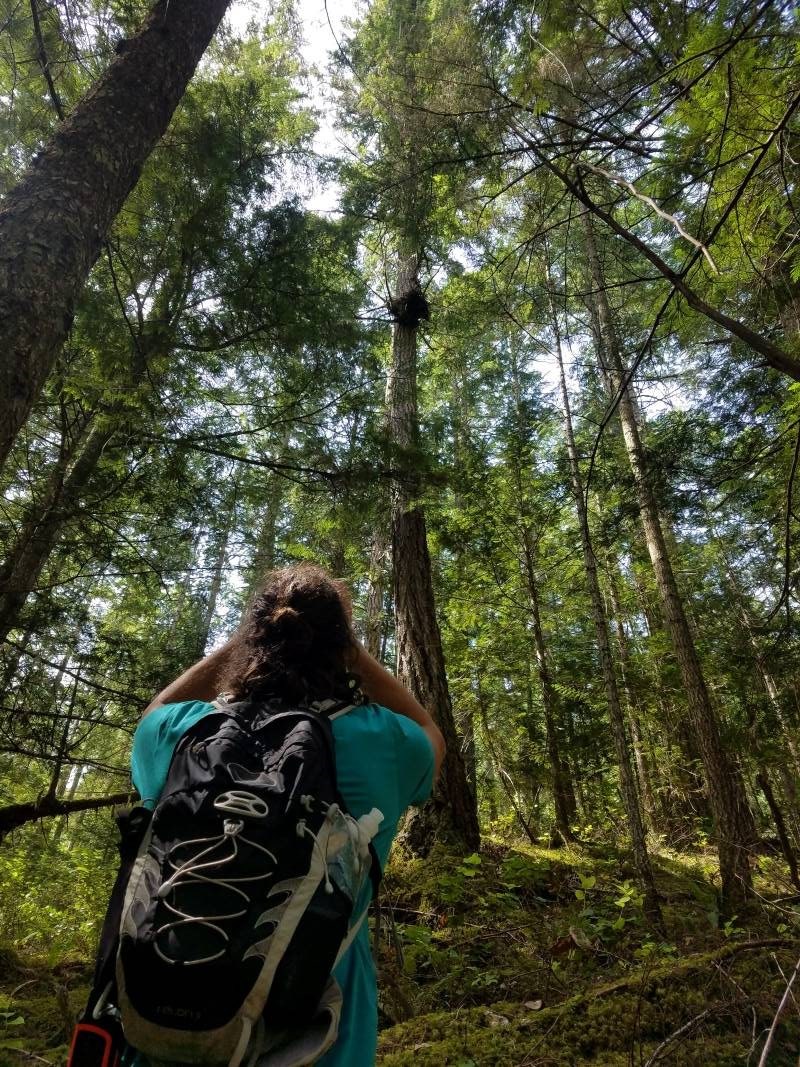 A program participant spies a northern goshawk nest on the Sunshine Coast.Submitted Photo

More money is going towards locating and protecting northern goshawk breeding grounds on the Sunshine Coast.

Habitat Conservation Trust Foundation (HCTF), a B.C.-based conservation non-profit, and the Forest Enhancement Society of B.C. (FESBC) have given $14,700 to the Sunshine Coast Wildlife Project to conduct field surveys to find breeding areas.

Northern goshawks are a “unique member of the raptor family,” according to a release, and “extremely agile hunters in the forest.” Their relatively short wings and long tails make them ideally suited to the mature forests with heavy canopies and minimal undergrowth, where they hunt. Pairs regularly build several nests in their territory using fresh evergreens and branches.

“Goshawks have huge home ranges, thousands of hectares in size, so finding the birds and their nests is a bit like looking for a needle in a haystack,” said Michelle Evelyn, Wildlife Project leader, in a release. “With support from HCTF and FESBC, over the past two years, we have been able to identify five new goshawk breeding territories on the Sunshine Coast.”

The province is working with logging companies, shíshálh Nation and other stakeholders to turn breeding areas into Wildlife Habitat Areas to prevent further decline. Habitat loss and fragmentation have made the bird a threatened species under the federal Species at Risk Act and it is on B.C. Red List.

“Seeing healthy babies in the nests and knowing that these vital areas will be protected for the goshawks, along with the many other wildlife species that share their mature forest habitats, makes us incredibly happy,” said Evelyn.

Funds will also be used to increase community involvement in raptor stewardship programs such as building and installing nest boxes for western screech-owls, which are also threatened.

Earlier this year, the province provided $500,000 to the Habitat Conservation Trust Foundation to support conservation efforts for the northern goshawk and the threatened marbled murrelet, a small seabird that nests in coastal old-growth trees.

Funding applications for conservation projects for both birds through the HCTF’s enhancement and restoration granting program will be accepted this fall.