Divers and volunteers walking the shoreline will be out in Gibsons Harbour next month for a “subtidal cleanup” of the eelgrass bed near the harbour’s south breakwater as part of the Healthy Harbour Project.
Sep 29, 2020 11:42 AM By: Sean Eckford 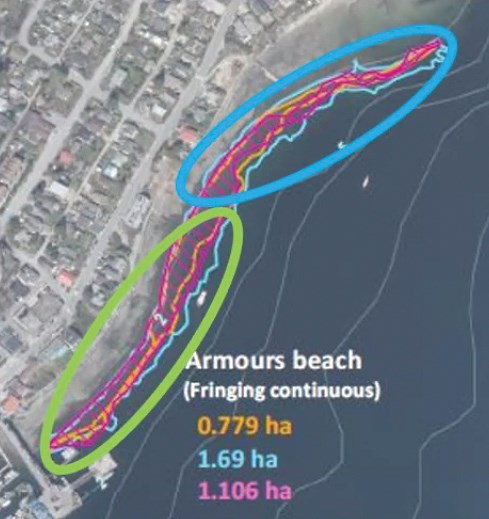 A map of the areas near Armours Beach in Gibsons where underwater surveys are being conducted as part of the Healthy Harbour Project.Town of Gibsons

Divers and volunteers walking the shoreline will be out in Gibsons Harbour next month for a “subtidal cleanup” of the eelgrass bed near the harbour’s south breakwater as part of the Healthy Harbour Project.

The four-year partnership between the Town and the Nicholas Sonntag Marine Education Centre is being backed by an estimated $25,000 contribution from the Town over several phases.

The marine education centre’s Graham Starsage briefed council Sept. 15 on the results of the project’s 2019 and 2020 work, which included a detailed biophysical survey of the known eelgrass habitat east of the breakwater.

Starsage said by the end this year they hope to complete similar surveys in the areas of eelgrass habitat near Armours Beach and investigate the impact of moorage in that area as well as debris mapping and establishing baselines for future comparison.

Starsage said as the project continues, two of the key focuses will be “evidence gathering” and making policy recommendations to the Town.

“You can’t make good spatial and resource management decisions without knowing what’s there, and it’s hard to know what’s there underwater,” he said. “So we do our data collection, surveying, mapping and reporting and then [the Town] has access to that information and the community has access to it.”

Starsage said one of the first policy recommendations that will be coming out of the project is to establish moorage exclusion zones in both the breakwater and Armours Beach areas and to begin work on a harbour user guide that can be given to commercial and recreational boaters and others who use the Town’s water lease area.

“[Completion of the guide] may be two or three years out, but I think the work should start here,” he said.

Starsage said the cleanup is scheduled for mid-October and is being backed by a $5,000 grant from the Pacific Salmon Foundation to help pay for a boat and disposal of the recovered waste.

Starsage also said the marine education centre is planning a release of sea life from its collection at the end of October and is adding a healthy harbour display, which he said he hopes will be “a good talking point for the whole community.”

Starsage said a report on the latest surveys will be going to council in November, with a formal presentation to follow in December.