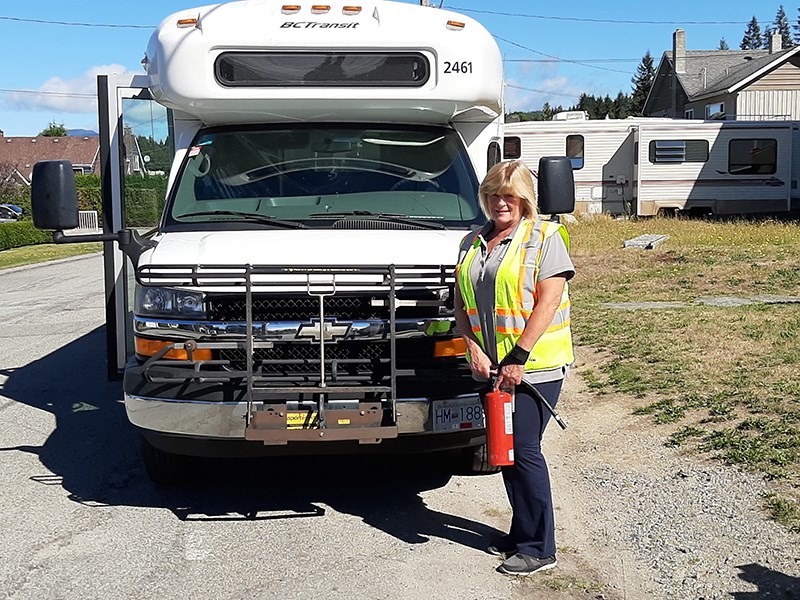 Paratransit driver Debi Gaylard was travelling her route near Black Point when she came across a bush fire at the side of the road and provided an extinguisher that helped put the flames out. Contributed photo

A paratransit driver for qathet Regional District was instrumental in putting out a fire that could have spread into the surrounding brush.

On September 1, around 3:30 pm, driver Debi Gaylard had left Stillwater and was approaching Black Point Market, where there is a bus stop.

“As I rounded the corner, going northbound, I could see nothing but smoke,” said Gaylard. “I couldn’t proceed because I could not drive safely through.

“Then I saw two women waiting on the side of the road, so I stopped and asked if they were okay. They said yes. I asked if they had called the fire department and then said they had.”

Gaylard told the women she had a fire extinguisher on her bus but she had a broken left thumb so she couldn’t operate it.

“I asked another gentleman who was running up on the scene if he could use it and he put out the fire for us,” said Gaylard.

She said it was evident that the blaze was a small brush fire at the side of the road. The fire appeared to have been human-caused, Gaylard added.

“The flames were knee-high when I arrived,” said Gaylard. “It was going to go right along the highway in a matter of minutes.” She said the fire started in what looked like hay at the side of the road.

The flames were out before the fire department arrived. After it was evident the fire had been extinguished, Gaylard continued on her route.

She said she has never experienced anything like this before in her driving career.

Gaylard had driven buses in the Lower Mainland for about 20 years, moved to Powell River and has been driving in the region for about two years.

“Driving in a rural community, you really have to be aware of what’s happening around you,” said Gaylard. “I was only there long enough to empty my extinguisher and make sure everyone on the scene was okay, as I have my first aid and could help them if needed. They were just glad I showed up.”