Buddy and Barb’s next adventure 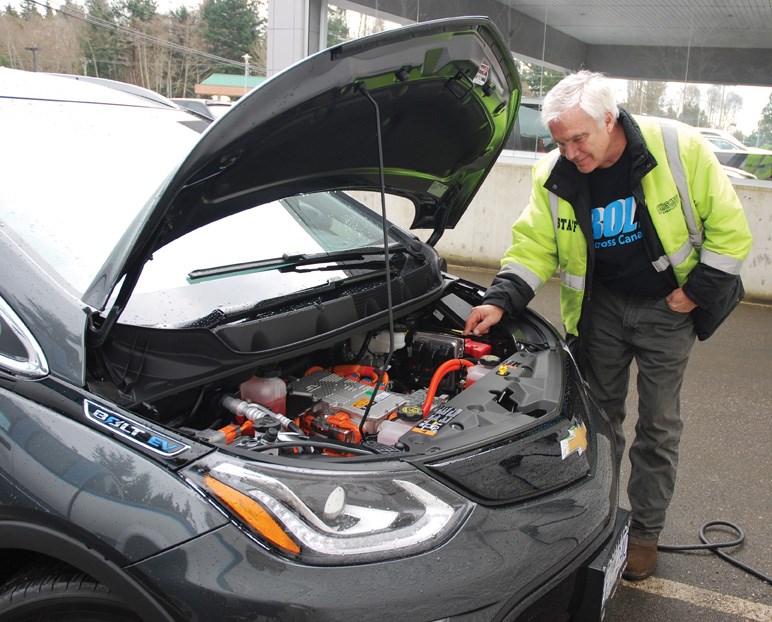 Buddy Boyd shows off what’s under the hood of the Bolt EV he and Barb Hetherington plan to drive across the country on a two-month trip to promote zero waste.Sean Eckford Photo

Gibsons-based zero waste advocates Buddy Boyd and Barb Hetherington are ready to bolt.  The couple is planning to skip town this summer for the Bolt Across Canada, a two-month trip across the country in their newly acquired electric vehicle (EV).

“We’ve got to get out into communities in Canada to educate them as to what true zero waste is really all about,” Boyd told Coast Reporter after taking delivery of a new Chevy Bolt following about eight months of researching EV options.

“We’re retiring out of Gibsons Recycling and the idea came up of a cross-country trip, but our electric vans don’t have enough range,” Boyd said. “Then the Bolt came out, and we looked at the numbers and they were spot on.”

But there was a big gap between wanting a Bolt and getting a Bolt, and that’s where Todd Macdonald of Haley GM came in. Macdonald calls Boyd one of the most passionate electric vehicle advocates he’s ever met, and jokes that he didn’t think his phone would stop ringing until he was able to get the car Boyd and Hetherington were after.

Macdonald said the timing was perfect because Haley is installing new equipment and training staff so it can be a dealer and service point for both the all-electric Bolt and its hybrid counterpart the Volt. Through connections with dealerships on the Lower Mainland, and a fortuitous cancellation by another person on the waiting list, he was able to get Boyd and Hetherington one of the first 50 Bolts to be sold in Canada.

Macdonald said he’s not surprised about the interest in electric vehicles, but potential purchasers still have a lot of questions.

“It’s a bit of the unknown. It’s not a mainstream product yet,” he said. “People are probably still concerned about the range, and what happens if they do make a mistake [and they run out of charge], or it has an issue …  I think it’s the overall comprehension for people. They need to know it’s just another vehicle; the electric motors are very, very capable, and there’s a lot of proven technology behind them.”

Electric vehicles being “here-and-now” is part of the story Boyd and Hetherington are hoping to tell on their cross-Canada trek.

“Part of our strategy is contacting electric vehicle associations across Canada, because a lot of communities have them, and also different rural GM dealers who might not be getting a Bolt and would like to see one,” Boyd said. “We’ve already got three or four speaking engagements booked.”

The stops so far will include Frontier, Sask., Red Deer, Alta., and Mississauga and Toronto, Ont. “It’s just kinda falling into place,” said Boyd. “We’re gonna book this as a two-month gig and progress all the way to Quidi Vidi, Newfoundland … It’s going to be pretty organic.”

They’re also lining up some sponsors, including Haley GM, Zero Waste Canada, the Vancouver Electric Vehicle Association, and eMotorWerks, a U.S. maker of portable EV charging stations. And, seeing as the trip is taking place during the 150th anniversary of Confederation, they’ve applied to Canada 150 for use of the sesquicentennial logo.

Boyd said he and Heth-erington will live the same zero waste lifestyle on the road as they do at home.

“Barb and I are taking our new small indoor electric composter. We’re going to take reusable containers, reusable cutlery and plates … and everywhere we go when he have food scraps we’ll do our own composting.”

Now that they’ve finally got their new EV, Boyd and Hetherington plan to ramp up their promotion of Bolt Across Canada ahead of their planned July 1 departure from Victoria.

“There’s going to be trials and tribulations along the way and all kinds of neat, cool things happening, but it’s the zero waste component that’s really, really important. If you want to go to other communities to talk about zero waste, what better way to go than in an electric vehicle? …  We’re going to keep a journal every day … and see what we produce in two months on a coast-to-coast trip.”

As far as the future of Gibsons Recycling is concerned, with the property sold, Boyd and Hetherington are still looking for buyers for the business itself.

“We’ve had a little bit of interest,” Boyd said. “We wanted to keep it as a community asset, and hopefully whoever takes over will reopen the reuse part because a lot of people were really sad to see that close. But, the way that recycling has evolved – or devolved – is through extended producer responsibility, EPR, and those programs don’t pay enough to cover the cost for the services … If we want these services, they do cost money … We’re hopeful that someone in our elected government will come through and say that was a really cool thing we had for our community and we don’t want to see it go away.”

Boyd and Hetherington are chronicling the trip at www.boltacrosscanada.com and the Facebook page Bolt Across Canada.