Buddy and Barb back from Bolt Across Canada 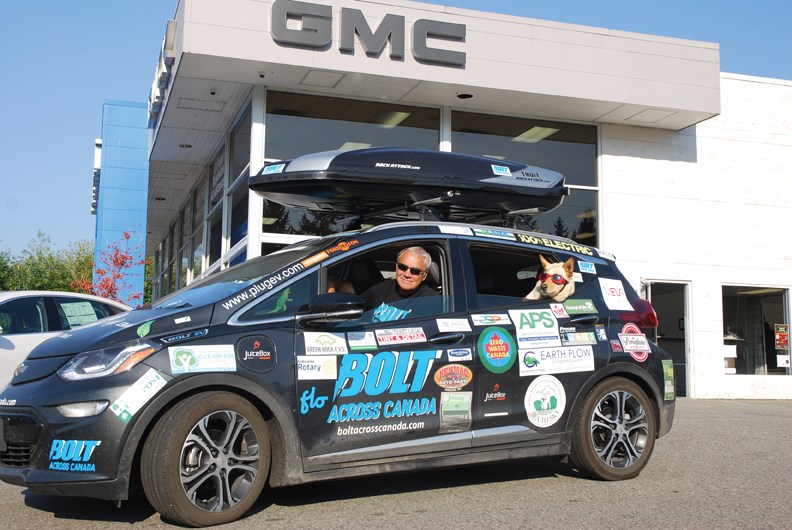 Buddy Boyd and Piper in the Bolt at Haley GM in Wilson Creek.Sean Eckford Photo

Zero waste advocates Buddy Boyd and Barb Hetherington say their Bolt Across Canada road trip has re-energized their commitment to zero waste and shown them that individual Canadians are adopting zero waste ideals even if their governments aren’t quite there yet.

Boyd, Hetherington and their dog Piper returned to Gibsons Aug. 26, in a Chevy Bolt EV (Electric Vehicle) covered in decals and in need of a good wash, after setting out from Victoria on July 1.

They covered more than 17,000 kilometres, touching the Bolt’s front wheels in the Atlantic Ocean at Quidi Vidi, Newfoundland to celebrate making it all the way across Canada.

The couple took to the road to spread the zero waste message, test the limits of the EV and see what was being done in other communities.

“One of the things we learned was the challenges some communities had [in getting to zero waste], but we also met individuals who were really adopting that mindset for themselves and that was really wonderful to see,” Hetherington said.

Boyd said it was simple things like rejecting single-use water bottles and coffee cups. “We were surprised at the level of that across Canada from an individual perspective.”

Boyd and Hetherington also met with mayors, councillors and government officials wherever they could and Boyd said governments were lagging behind their citizens in recognizing that zero waste doesn’t begin and end with curbside recycling.

“Most of the policy makers thought the only option for composting is a curbside bin. They had no idea that technology has caught up with composting,” said Boyd. “The only thing that’s being pushed is curbside collection. We’ll never get zero waste properly implemented in our communities if we don’t change our behaviours at source where the waste is generated – at our homes and at our businesses.”

Hetherington said she thought the message got through. “We started that conversation and I think we were successful. We wanted to show it was a grassroots movement, that regular people can make a difference. We were able to reach a diverse demographic.”

Boyd said local government officials in smaller towns were the most receptive.

“I think it’s because they know they have to do something. It seemed the common thing we heard from the policy makers and movers and shakers in those communities is, ‘We’re running out of landfill space.’ So when we got [to a community] we said when we leave your community we’re not leaving any stuff behind, which intrigued them. Then we said if we can do that in the inconvenience of a vehicle trip on vacation, what would happen if we took some of these ideas and implemented them into policy.”

Hetherington said, “They could see the big picture, that by adopting the whole concept of zero waste they could improve their economy and create jobs. They could rectify some of the food security issues in their communities.”

On the practical side, Boyd and Hetherington said the Bolt, which was fully loaded with a rear carrier to haul camping gear and a roof-top cargo box, performed every bit as well as a gas-powered vehicle would on a long trip.

Boyd, who did all the driving, said once he perfected the techniques of EV driving he was able to extend the range beyond the Bolt’s 400-kilometre-per-charge spec, especially by using the terrain.

“Climbing up the hills means you’re going to come down the hills, and this car has one of the best regenerative systems, so that we captured a lot of energy,” said Boyd. “Going from Castlegar to Osoyoos we put 101 kilometres [of range] back into the battery coming down the hills… Tell me with which gas vehicle, when you arrive at the destination, some extra gas went into the tank.”

Boyd said there were a few spots in Newfoundland and Saskatchewan where finding a place to charge was a bit challenging, but they also found a lot of EV infrastructure in Ontario and New Brunswick.

“By far the best was Quebec,” said Boyd, who noted that the province also has a very healthy EV culture and the Electric Vehicle Association of Quebec put on a big display to mark their stop in Rivière-du-Loup.

“If you’re trying to create economic development in a community, putting in a proper electric vehicle charging infrastructure is nothing but opportunity. EVers are looking for destination places to take their cars.”

Boyd and Hetherington said they also encountered a few skeptics who thought the only way they could be covering the distances they did in the Bolt was if the rear carrier hid a spare battery or a generator.

Boyd said the trip has convinced him that for a lot of people, a switch to electric vehicles is going to be the starting point in adopting a zero waste lifestyle.

“We’re going to go heavier into the zero waste movement. And we’re going to find a way to attach the zero waste movement to the electric vehicle movement because it’s a natural fit,” he said. “For me personally it’s been like a Reece’s Peanut Butter Cup moment. Zero waste being the peanut butter, electric vehicles being the chocolate... We can’t sit around waiting for somebody to come and fix our climate change problem. We can do things proactively ourselves on an individual basis by changing our behaviour.”

Hetherington added that governments need to follow that lead. “I think government and manufacturers have to be as bold as the [zero waste] adopters, and they’re not right now.”

Bolt Across Canada by the Numbers

• They left zero kilograms of food scraps behind, and instead used a small counter-top composter to create 10 litres of finished compost.

• They left zero kilograms of garbage in the communities they visited and returned home with just one small bag to dispose of.