Past tragedy and forward echoes 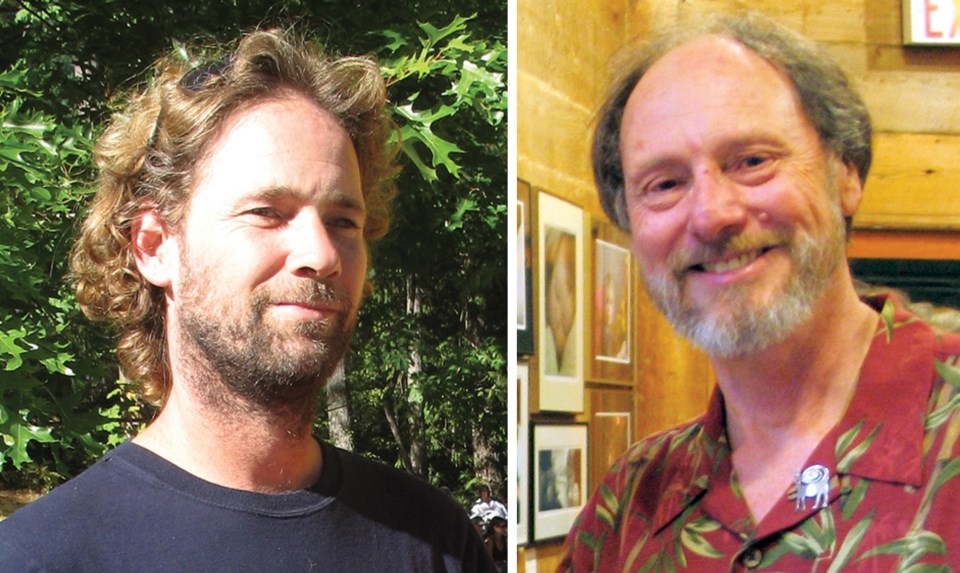 Two Sunshine Coast authors are celebrating their new books of poetry this fall. Joe Denham’s Regeneration Machine is published by Nightwood Editions, and John Pass’s Forecast: Selected Early Poems 1970-1990 is published by Harbour. The two poets are friends and mutually supportive in their work. They will launch both books on Thursday, Nov. 19 at the Sunshine Coast Arts Centre (5714 Medusa St., Sechelt) at 7 p.m.

The genesis of Denham’s latest work is a true tragic story about a good friend, a Pender Harbour man, Nevin Sample.

“He was so present, with so much energy,” Denham recalls. Denham was as shocked as everyone when in 1995, at age 22, Sample robbed a bank, fled the scene and with the RCMP in pursuit, and shot himself rather than surrender. It was a devastating loss to the community.

You will need this back story in order to read Denham’s 50-page, non-linear letter in verse dedicated to his friend who died so tragically – and yet, the book is not about Sample, but about Denham.

“That tends to happen with tragedies,” he told Coast Reporter. “They bounce off of each other in your mind.” It took him eight years to write and after the first 10 pages he slowed down to understand the process better.

“I’m a writer who tries to figure something out by writing,” he explains. The pacing of the poem suggested there could be a lot more. Soon he didn’t know how to stop – he had built a construct, a world, that might have been Sample’s world, and it inhabited Denham’s mind.

Denham works construction, writes songs, plays music, loves his family and is a fisherman. A previous poetry book, Windstorm, was a complex lyrical discourse permeated by the ocean. He very much belongs to this Sunshine Coast and some of the characters he talks about in Regeneration Machine will be familiar to us: Simon who fell from scaffolding, Bruce who played music outside the liquor store. This book is more within reach than Denham’s past poetry; it plumbs the depths of crises and reveals much about the poet.

The skin is also thin on John Pass in Forecast, a collection of early poems, some of which have been previously published in journals.

Many of the poems predate Pass’s move to the Coast in 1982. They refer to Vancouver landmarks such as Wreck Beach or describe a journey on the crosstown bus. Many are earthier in tone than his current work; they describe the raw, physical preoccupations of a younger man in building a house or bedding a lover. As the young man matures, his focus turns to home, beloved wife and rampant nature.

“My small poems open a moment close to me,” he writes in “The Proximity.” Though his work has developed over the decades, Pass has found constants throughout, characteristics in them he thinks of as “forward echoes.”

“For example, my second grandchild was born a month ago,” he says. “My first is now 16 months old, and I’ll be reading poems I wrote for their fathers as babies (“Second Son”). I can see and find my way from this early work to the present, to the life Theresa (Kishkan) and I have built here. I think it might mirror the common experience of many Coast residents, how our generation settled here, and the times we’ve lived through, viewed from this rural paradise.”

You can buy either or both books at the launch – each costs $18.95 – courtesy of Talewind Books.