Blame the moon for the mayhem described in a fresh new anthology of 20 short stories of mystery and suspense.
Jun 24, 2021 9:52 AM By: Jan DeGrass Contributing Writer 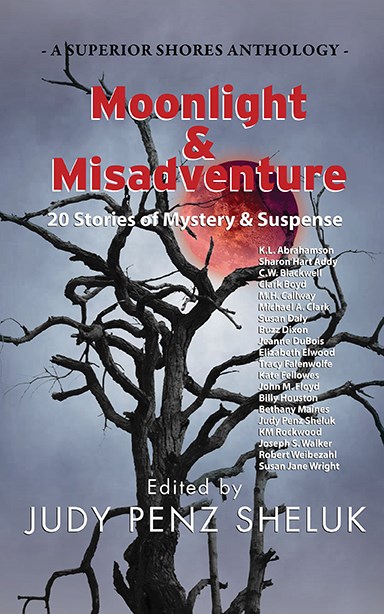 Blame the moon for the mayhem described in a fresh new anthology of 20 short stories of mystery and suspense. Moonlight & Misadventure by Superior Shores Press draws on the storytelling talents of an international band of crime and mystery writers, in a collection edited by Judy Penz Sheluk.

The tales of two Sunshine Coast authors are featured. Elizabeth Elwood, formerly a summer visitor to the Coast, has made the permanent move to Garden Bay where her fans have enjoyed her six mystery books about the sleuthing Beary family. In her short story, “Ill Met by Moonlight, Proud Miss Dolmas,” Elwood draws on her own experience as a theatre, opera and drama performer and teacher. A controlling high school principal, Miss Dolmas, micromanages her teaching staff. When she threatens to cancel the school play, A Midsummer Night’s Dream, because Shakespeare is “irrelevant,” she becomes a target for hate.

A resident of the Sunshine Coast, Karen L. Abrahamson is no stranger to the mystery genre though she also writes literary, romantic and fantasy fiction. In her Moonlight short story, bad things happen in the bread pudding. The youthful protagonist, Grace-Rose, plans a mischievous egging of a hated old man, but it goes horribly wrong and lands her under police scrutiny.

Ontario journalist and anthology editor, Penz Sheluk, contributes her own short story, “Strawberry Moon.” Camping by moonlight turns out to be too much for a harried wife. She snaps … and carries the reader to a surprise ending.

In other Moonlight stories, Clark Boyd, a Dutch fiction writer, tells how doofus twins plan to share the legacy of their bankrupt father. The quirky plot is worthy of a Coen Brothers movie.

Who can resist reading a story with the title: “My Night with the Duke of Edinburgh” by Susan Daly? And no book would be complete without a reference to Thoth, the moon god, (aka Stanley) in M.H. Callway’s story, “The Moon God of Broadmoor.”

This collection is a lively read – without the worst of gore and graphic violence. Find Moonlight & Misadventure in paperback and all digital formats.