Essays in a new language 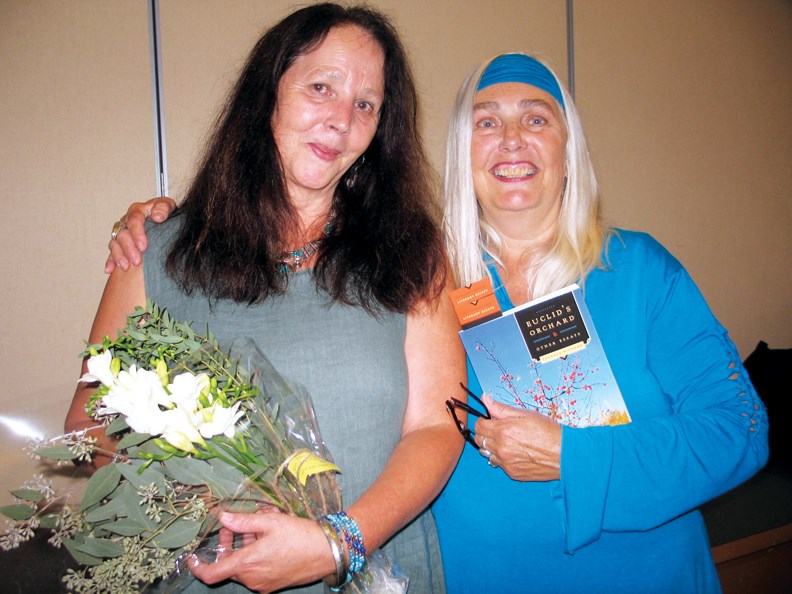 Theresa Kishkan is no math whiz, as she freely admitted to the audience at the Sechelt Library in September when she launched her collection of essays titled Euclid’s Orchard, published by Mother Tongue. But she has a mathematician son who encouraged her, and she discovered that it was never too late in life to learn this new language, so different from her own lyrical prose.

The title essay is based on a principle of mathematics: Euclid’s orchard is an array of one-dimensional “trees” of unit height planted at the lattice points in one quadrant of a square lattice. This concept was baffling at first, but soon Kishkan found the interconnectedness of all things – the math led her to the fruit trees she and her husband had planted around their rural home in Pender Harbour.

Trees figure largely in Kishkan’s writing (a previous work is titled Mnemonic: A Book of Trees) and the trees evoked other images of coyotes singing, of quilts she is working on, of her son lying in the orchard gazing up at the stars. Always one for describing the rhythms of nature, Kishkan delves into the structure of a bee hive’s hexagonal cells. Quilters will understand the comparison with the geometric patterns of quilts.

Though mathematics has prompted a new way of looking at the world, in reality this book is about families, from Kishkan’s grandparents through her formidable father to her own children, now grown.

The essay, West of the Fourth Meridian, describes Kishkan as an adult finding her way back in time to Drumheller, Alberta, in the 1920s where her grandmother married her first husband who died in the Spanish flu epidemic. The grandmother’s second marriage gave life to the author’s father. As Kishkan journeys through time and place, the memories are interwoven with musical metaphors. Then the research begins – to find her father’s roots. Her mother’s roots as a foster child are explored in the essay Tokens. Poignant Mountain is about Kishkan’s own early memories of living in the Matsqui area. Thus she moves through the generations.

Euclid’s Orchard is at Talewind Books in Sechelt for $22.95.