Eden Robinson shares the fun and foibles of authorship 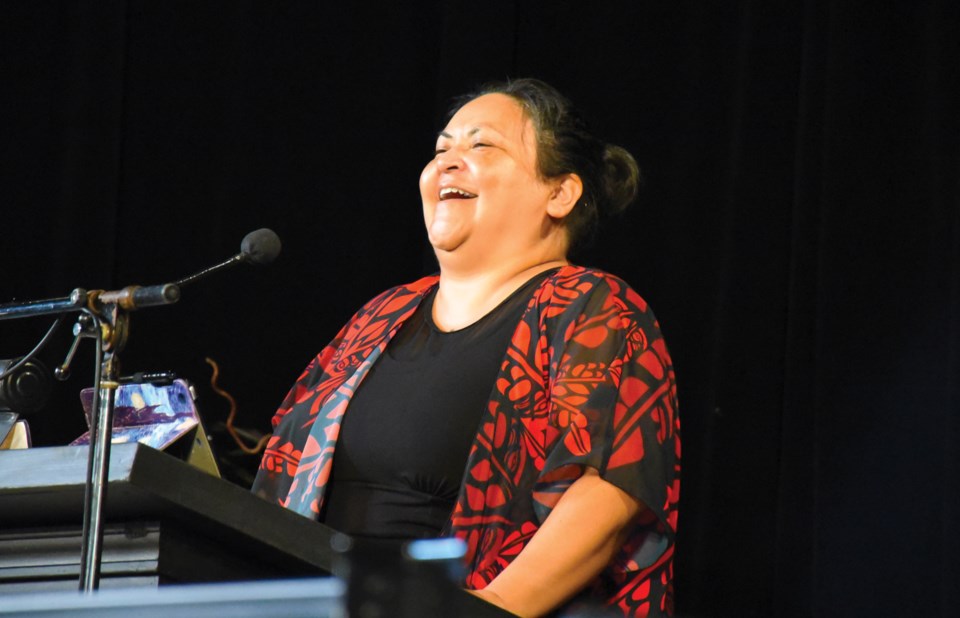 Author Eden Robinson delighted the capacity crowd at the writers festival on Aug. 17 with her stories and her infectious laughter.Rik Jespersen Photo

The life of a popular professional artist is a rare privilege, one that is creatively demanding but fulfilling, precarious but thrilling. The adulation doesn’t hurt, either. What we less often hear about, however, are the caffeine-induced hallucinations.

Eden Robinson had the full-house audience at the Sunshine Coast Festival of the Written Arts on Saturday, Aug. 17, laughing repeatedly with her account of her sometimes harrowing experience as a published writer, notwithstanding the award nominations, accolades and future project commitments that her career has brought her.

“During the writing of Monkey Beach [her second book], I was doing pretty long days. I would drink two pots of coffee, two litres of Pepsi Max, then I would cool down with a pot of tea. If I went over that I would go into a state of caffeine psychosis,” Robinson said. “It was close to the end of one of my writing sessions when I saw this creature crawling across the floor. It was just all heads, and they were all moving.” She was deeply relieved to eventually realize, “it was just my laundry.” She added that she no longer does quite so much caffeine.

The jovial Robinson, 51, is a member of the Haisla and Heiltsuk First Nations, born and raised in Kitimat, about 500 kilometres north of the Sunshine Coast. The traditions of her native heritage have helped inspire a string of highly successful books, which feature stories that are a fun, frightening and highly imaginative mashup of native mysticism and contemporary culture.

It’s an original formula that worked right out of the gate. Her first book, the collection of short stories Traplines (1995), won the U.K.’s Winnifred Holtby Memorial Prize. Her second book was Monkey Beach, a novel short-listed for the Giller Prize and the Governor General’s Literary Award, and which won the Ethel Wilson Fiction Prize. It’s also been made into a $3-million feature movie by Gibsons-based director Loretta Todd, who currently has it in post-production.

Then came Robinson’s trickster trilogy – the trickster being a major player in native mythology. The first book, Son of a Trickster (2017), was also short-listed for a Giller. Its sequel, Trickster Drift (2018), won the author a second Ethel Wilson Fiction Prize. The third book, Return of the Trickster, should be published soon. CBC, meanwhile, has announced it is producing a six-episode television series, The Trickster, based on the trilogy, to be broadcast in 2020.

While her publishing career has been a parade of hits, Robinson admitted it’s not like gold consistently flows from her typing fingertips. There are a lot of hits and misses involved, thus a great deal of work. The first book of the trilogy took eight years to write. And early in the writing of Monkey Beach she created a character she loved, a shapeshifter who changed into an alien and demanded to be taken to Elvis. He was forced out after three drafts of the manuscript.

“That’s where I rely on my first readers and my editors to tell me when ‘that isn’t working,’” Robinson said. “Usually they’re right.”