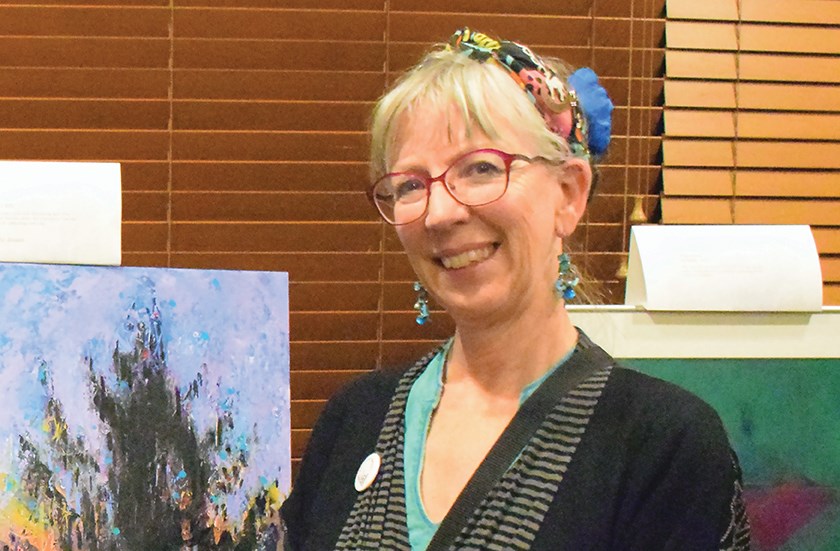 Gibsons painter and arts volunteer Paula O’Brien has been named as the recipient of the Frances Wasserlein Award.RIK JESPERSEN PHOTO

The B.C. Federation of Writers is hosting an online reading by six Sunshine Coast authors on Thursday, Feb. 11. Featured will be Nicole Breit, Heather Conn, Claire Finlayson, Stella Leventoyannis Harvey, Bruno Huber, and Jennie Tschoban. The event offers an interesting mix of writers of fiction, non-fiction, poetry, and memoirs. It’s free and scheduled to run from 7 to 8:15 p.m., with the “digital doors” opening at 6:45. The moderator will be poet and short-story writer Atma Frans. To register, go to the federation’s website at bcwriters.ca.

The Sunshine Coast Arts Council has announced winners of two of its four annual awards. The Gillian Lowndes Award for longstanding achievement goes to Mieke Bray, who creates many of her unique projects under the name Mieke Jay. Bray/Jay “has been a part of shows and special events in British Columbia for over 20 years,” the council noted in a release. She specializes in multi-media projection installations, often with an immersive aspect in which we aren’t just viewers but participants. The Sechelt Arts Festival has featured her installations over the past two years, “The Space Between” and “Meme Me,” produced with Coast Streaming collaborator Steve Wright.

Honoured with the Frances Wasserlein Award for “voluntary leadership in an arts or cultural capacity” was Paula O’Brien. For the past 10 years, Paula, an accomplished painter, has provided technical and administrative support to arts groups such as Gibsons Public Art Gallery and the Sunshine Coast Arts Council. She’s also on the Gibsons gallery’s board of directors and helps out every year with the Coast’s Art Crawl. “We often hear of the thriving arts scene on the Sunshine Coast – it is people like Paula who make it happen,” the arts council said. Honorees for the council’s Anne and Philip Klein Award and Louise Baril Memorial Award are to be announced later this year.

On Saturday, Feb. 6, at 7 p.m., the Sunshine Coast Arts Council’s Literary Reading Series will feature Joshua Whitehead, “one of the most compelling, creative, and provocative voices in Indigenous literature today.” Whitehead will read from his critically acclaimed novel, Jonny Appleseed, and the poetry collection, full-metal indigiqueer. The event is free and on Zoom. Register through a link on the arts council’s website or at eventbrite.ca.

The Powell River Film Festival runs from Friday, Feb. 5 to Tuesday, Feb. 16, and you don’t have take the ferry to take part because it’s all online. There’s a little something for everyone in the film lineup, and among the many standouts is Monkey Beach, directed by Gibsons-based filmmaker Loretta Todd from Eden Robinson’s popular novel of the same name. You can buy a pass to see everything or pay for films individually. There are also bonus features, film-festival style, like online conversations with filmmakers, including Todd. Go to prfilmfestival.ca to get viewing.

Please let us know about your events at arts@coastreporter.net