Pair aims to provide affordable transportation for people with mobility challenges
Jul 15, 2021 11:07 AM By: Sophie Woodrooffe 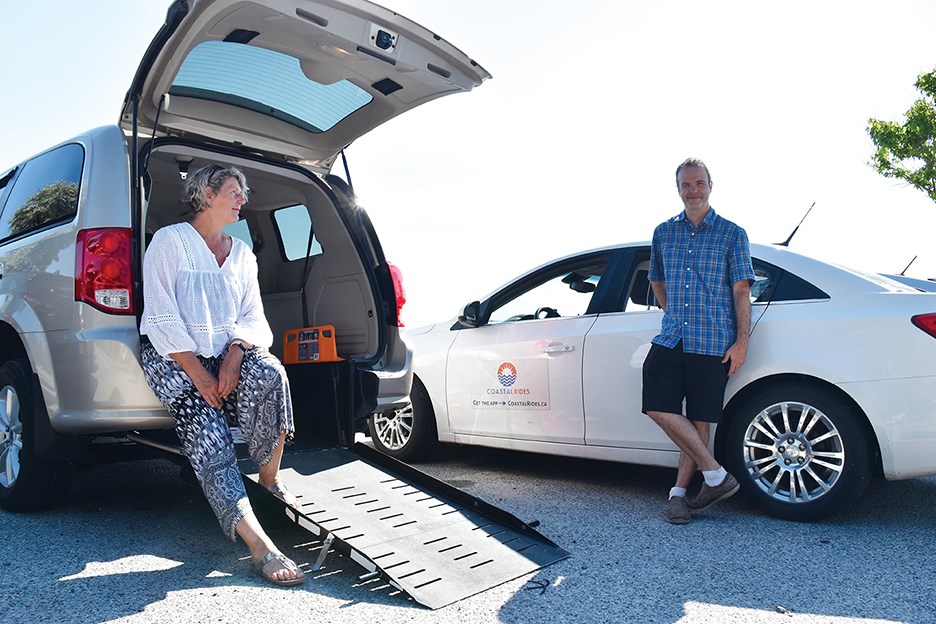 Some services aren’t made for rural communities and their absence threatens people’s human dignity.

That’s the lesson Roberts Creek resident Lynn Chapman learned after her husband, John Turnbull, was diagnosed with ALS and lost his ability to walk, leaving them scrambling for accessible transportation options.

“Until you have the experience of needing a service that is not in place, you don’t understand what it feels like,” Chapman told Coast Reporter.

Chapman and Turnbull first experienced the feeling last July when arranging a ride from their home to Sechelt Hospital for an imaging test.

The Sunshine Coast Regional District (SCRD) “moved heaven and earth” to get them to the appointment on time, but they were initially told – incorrectly – that they wouldn’t qualify for the door-to-door service offered by BC Transit’s handyDart bus system because they lived outside the service boundary.

Their home sits just on the edge of the 1.5-kilometre radius from the BC Transit service area. Anyone who lives beyond it can’t access handyDart.

While the error was corrected and they were given a ride, for Chapman, 74, the logistical hurdle didn’t end there.

She was told she would have to push her husband up their long, narrow, sloping driveway to reach the bus because, as it turns out, it couldn’t actually drive to their door. A family member stepped in to help.

In the end, they made it to the appointment. But the ordeal left her feeling shocked that distance from the fixed bus route system was a key deciding factor in whether someone with mobility challenges on the Sunshine Coast can get affordable, public transit. “It’s completely wrong,” she said.

It turns out she’s not alone.

Transit business owners Maryanne Brabander and Ryan Staley have formed Getting There Society to provide affordable transportation for people with mobility challenges to access health care and other basic services, which they say is a human right.

The pair hope to secure grants and donations to raise $200,000 to fund operations from Egmont to Langdale, with the long-term goal of purchasing an accessible electric van.

They’re also reaching out to other transportation service providers that operate on the Coast in hopes of establishing a transit network for people who use wheelchairs, scooters, support dogs or who have attendants.

Staley said they often receive requests about wheelchair-accessible vehicles, either for medical appointments to the Lower Mainland or for point-to-point transportation on the Coast, because unless people live within the handyDart service area and can plan their trip two weeks in advance, or are on a bus route, publicly-accessible transportation isn’t available.

“There is a transportation gap there, particularly beyond the fixed-route transit system and beyond the handyDart system,” said Staley, owner of ride hailing business Coastal Rides.

It’s so dire that some people are forced to rely on ambulance rides through BC Emergency Health Services if they don’t live within the handyDart service boundary, said Brabander, who owns an accessible transit company called Care For A Lift.

Chapman told Coast Reporter they were faced with that possibility in January when they needed to get Turnbull to an ALS clinic in Vancouver.

At that time, she didn’t know about Care For A Lift and they needed to be at the Langdale terminal early – too early for HandyDart’s service hours.

“There we [were], trying to figure out how in the hell we’re going to get to GF Strong,” said Chapman.

She called “pretty much every organization I could think of” to get a wheelchair-accessible van but “struck out completely.”

Eventually, Chapman secured a ride through Care For A Lift. The trip in a wheelchair-accessible van got them to the appointment comfortably and safely and back to their home – all the way down their driveway to the front door.

While Care For A Lift offers accessible transportation for people with mobility challenges, at $300 for a trip to West Vancouver with a companion, the service is out of reach for people on fixed incomes.

Chapman said her trip cost almost $400. For her the expense was worth it.

The idea to launch a not-for-profit arose in part because of the pandemic, which revealed just how stark accessibility can be for people with limited mobility, Brabander told Coast Reporter.

She was asked to fill service gaps left open after Vancouver Coastal Health was forced to shutter its volunteer driver program.

But not everyone could afford her rates. “COVID really showed a whole other side of the transportation issue,” she said.

“When you have people that are on fixed incomes and they need to have the accessibility, and they’re counting on volunteer drivers and they have mobility issues, there was a real problem.”

Coastal Rides’ fleet, meanwhile, doesn’t include a wheelchair-accessible van and personnel aren’t trained to assist people with mobility needs. Neither are taxis.

Brabander and Staley say Getting There Society would fill that gap – using the booking technology and licensing already in place for the two companies, as well as their vehicles, including the wheelchair-accessible van, with clients charged more affordable rates.

A rate structure is still being worked out, said Staley, since it will depend on grant and fundraising revenue – but if they can raise enough to cover driver fees, “then we can probably cut the fare down by about 75 per cent,” he said.

They are also planning to allow organizations to rent out the van already operating through Care For A Lift, as well as an electric one if purchased down the road. “It’s meant for the community,” said Brabander. “If we have a vehicle that’s accessible for lots of organizations on the Sunshine Coast, that’s the big goal.”

The SCRD confirmed with Coast Reporter it supports additional service and sees the “benefit in having supplementary wheelchair-accessible transit for people who live outside the handyDart boundaries.”

A 2014 Transit Future Plan indicated the Coast’s aging demographic would have a “significant impact on the demand” of handyDart service.

At that time there were 171 regular users of the service.

Brabander and Staley have been applying for grants since establishing their non-profit in March and are also looking to Sunshine Coast residents to help with fundraising.

“If we want this vehicle to be available in the community, we’re going to need some community support,” said Staley.

“We just want to make it affordable,” said Brabander.

“We want to fill a gap and we want to keep the community connected.”