The latter part of June is our last opportunity to see many species of birds in their finest breeding plumage and singing their best songs.
Jun 17, 2021 2:17 PM By: Tony Greenfield 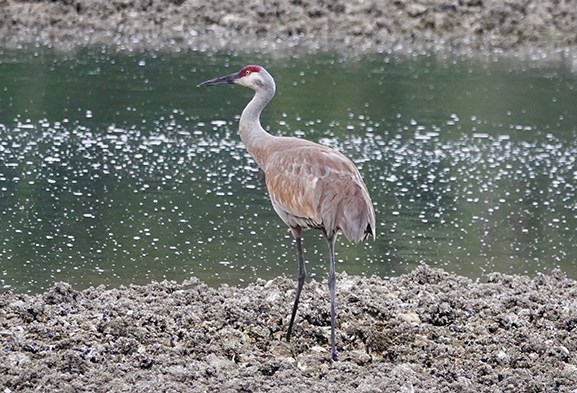 A sandhill crane takes a stroll along Oyster Bay in Pender Harbour on June 1. The species averages about one bird per year on the Sunshine Coast.John Field Photo

The latter part of June is our last opportunity to see many species of birds in their finest breeding plumage and singing their best songs. By the end of June, the necessity for male birds to sing and to show off their bright plumage, both traits entirely devoted to attracting a female partner, is over. After that the biological imperative is to be insignificant and to avoid the attention of predators. Both bright breeding plumage and song gradually peter out but the contrast between mid-June and mid-July is stark.

Signs of the change are not restricted to our local birds as amazingly the first shorebirds begin to reappear along our shorelines and estuaries in late June. These birds have already migrated to the Arctic, raised a family, and are heading south again.

Survival is a precarious proposition for many birds on the lower rungs of the food chain, and the head of Porpoise Bay and the Sechelt Marsh have been a case study. Canada geese, mallards, and common and hooded mergansers all breed in the vicinity, close to the water. All of these species have fairly large families, with about 10 young, but there is a very high attrition rate as predators pick off the defenceless young one by one. Residents of the area have observed bald eagles and peregrine falcons swooping out of the sky to pick off a duckling in the water. Much predation goes unobserved as raccoons, mink, coyotes and domestic cats are all on the lookout for an opportunistic snack. The large families that hatch from the egg are soon reduced to one or two young, just enough to keep the population stable.

On June 10, Mari Petznek photographed a tern in Porpoise Bay that was ultimately identified as a Forster’s tern. This species is a rarity in coastal B.C. and this is only the second record for the Sunshine Coast. The only B.C. breeding location for the species is at Creston in the Kootenays, so this bird was way off course. On June 1, Solveigh Harrison spotted a sandhill crane in Oyster Bay, Pender Harbour. This species occasionally visits or overflies the Sunshine Coast during migration periods, but only averages about one bird per year. After the bird departed Oyster Bay it flew south and in a minor miracle Karen Holland saw a bird flying overhead in Selma Park, recognized the distinctive profile of a crane, and managed a quick photo of the bird. Other notable birds in June have been a western kingbird in Porpoise Bay and various scattered reports of the stunning lazuli bunting. To report your sightings or questions contact tony@whiskeyjacknaturetours.com or 604-885-5539. Good Birding.