The city continues to see the most expensive rent in Canada.

While Vancouver one-bedroom rentals haven't increased in price this month over last, the city continues to see the highest rent in the country.

Conducted by Padmapper.ca, the April report analyzes rental data from hundreds of thousands of active listings across the country. From there, listings are aggregated every month to calculate median asking rents for the top 24 most populous metropolitan areas.

For the first time since January 2020, one-bedroom rents in both Vancouver and Toronto were flat on a monthly basis. (Though rent prices were still down in the double-digits year-over-year.)

"These flat rates may be a result of a recent migration of renters who never lived in these pricey cities but wanted to take advantage of the cheap rent and unheard of move-in specials currently being offered," explains Padmapper.ca. "These new renters moving in evens out the overall demand so we aren’t seeing the trend of continuous decline in rent prices anymore."

In Vancouver, one and two-bedroom rents stayed flat at $1,900 and $2,600, respectively. On a year-over-year basis, prices for both bedroom types are down over 11 per cent.

Similarly, Toronto's market also remained flat this month with one and two-bedroom rents staying stable at $1,750 and $2,300, respectively. Prices for both bedroom types are down around 22 per cent since this time last year.

Burnaby continues to see the third-highest rent in the country for one-bedroom apartments, with rent growing 2.4 per cent to $1,700. Two-bedroom rentals remained flat at $2,200.

In Ontario, Barrie moved up a spot to become the fourth-priciest city with one-bedroom rent jumping 5.1 per cent to $1,650. Two-bedroom apartments grew 4.7 per cent to $1,770.

Victoria rounds out the top five priciest markets in Canada. That said, B.C.'s capital city saw one-bedroom apartment rents falling 3.8 per cent to $1,540 and two-bedrooms decreasing 1.5 per cent to $1,970 this month. 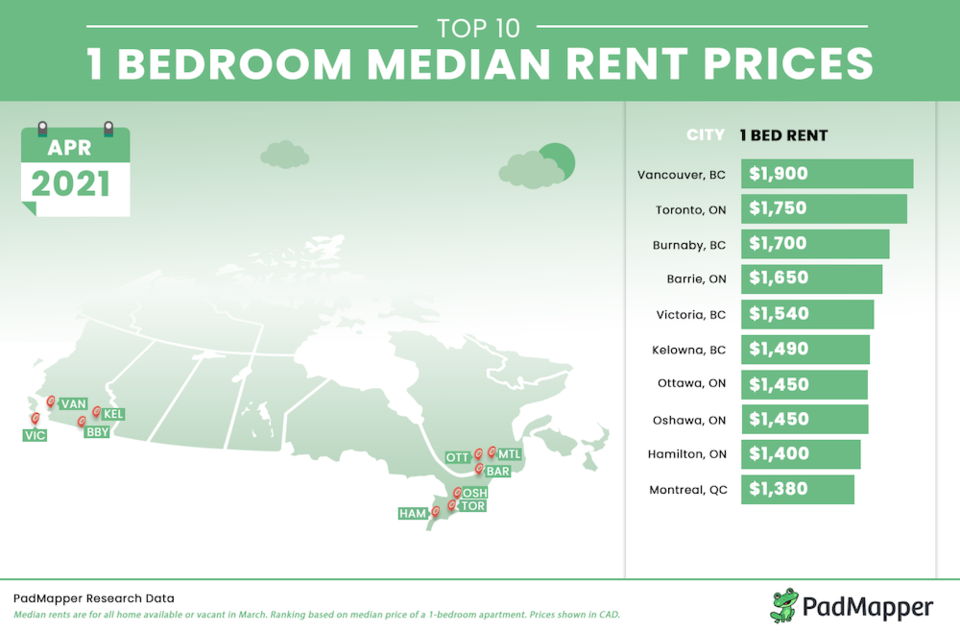 The report is based on all data available in the month before publication. Any data that is reported does not include short-term or Airbnb listings.

Here's how this Vancouver theatre has managed to stay open during the COVID-19 pandemic
Mar 11, 2021 8:32 PM
Comments