OTTAWA — A group representing thousands of the country's small businesses says many hope the Trudeau Liberals heed their concerns and reshape aid in the upcoming federal budget to help them survive the COVID-19 pandemic.
Apr 12, 2021 3:13 PM By: The Canadian Press 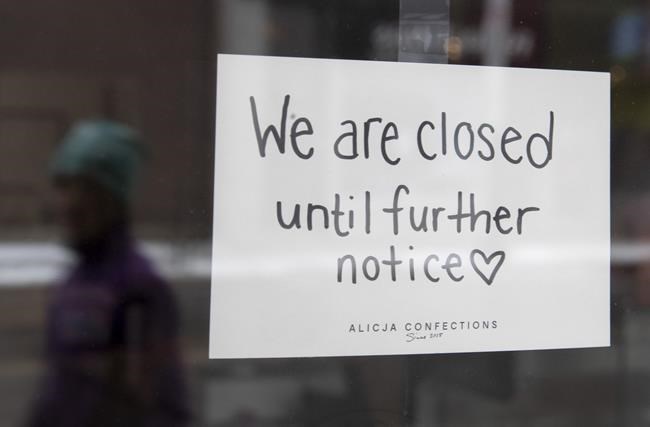 OTTAWA — A group representing thousands of the country's small businesses says many hope the Trudeau Liberals heed their concerns and reshape aid in the upcoming federal budget to help them survive the COVID-19 pandemic.

The Canadian Federation of Independent Business said lockdowns and public-health restrictions hitting non-essential retail stores have stretched some to the financial brink, making them reliant on federal aid to cover everyday costs and keep employees on payrolls.

President Dan Kelly said it is crucial to maintain programs to help businesses to the other side of the pandemic but with fixes to catch companies still slipping through cracks.

Kelly also said he hopes the Liberals add a new round of funding to a popular loan program to increase the amounts available to $80,000 and make up to half of that forgivable if paid off on time.

But Kelly isn't all that confident the Liberals will do anything, and he believes that federal momentum to fix economic supports has stalled after the Liberals amended some programs and extended deadlines for others.

While the Liberals have changed eligibility for some programs, such as the revamped rent subsidy that includes a lockdown top-up, Kelly said thousands of needy small businesses have been unable to access federal programs without any indication their concerns will be addressed.

"It really does feel like Ottawa has moved on," Kelly said in an interview.

"They've moved into … other files, and I think it's a serious miscalculation," he added. "Look, if I'm wrong, I'll be delighted to be wrong — that if there's going to be a surprise, a positive announcement of further supports to small businesses that are really hit hard, but I'm not seeing any momentum from Ottawa."

The government has targeted June for an end to the federal wage and rent subsidies, as well as the small-business loan program. The economy is expected to start growing faster in the second half of the year as vaccination rates rise alongside consumer spending, fuelled by built-up savings through the pandemic.

"Until people start spending, businesses are not going to have to the kind of recovery they're hoping for, and I think it's critical that we continue to provide support for people who can actually create that spending," said Hassan Yussuff, president of the Canadian Labour Congress.

A Bank of Canada survey of consumer expectations showed that respondents anticipated spending more than one-third of extra savings from the pandemic over the next two years.

The survey released Monday also said consumers expect their spending patterns to return to normal in about one year, with post-vaccination increases on a wide range of goods, especially travel and social activities.

Getting the economy through the pandemic, with the latest wave renewing lockdowns in parts of the country, and laying the groundwork for recovery will be a balancing act the Liberals will look to strike in the April 19 budget.

While the number of businesses experiencing steep revenue declines appears to have stabilized, half of businesses in the arts, entertainment, accommodation and food services sectors are reporting revenue declines of 30 per cent or more compared to last year, according to a review of Statistics Canada data by Deloitte and the Canadian Chamber of Commerce.

Finance Minister Chrystia Freeland has promised to spend up to $100 billion over three years should economic conditions, particularly employment numbers, require it.

Kelly said his concern is that stimulus now, while potentially helpful, could lead to spending on businesses that remain open through lockdowns and not on those that could use the spending.

"My fear is money is going to go to buy big-screen TVs at Costco online because the parts of the economy that have been bleeding are not a fully open, (and) Canadians are still being told that they're not supposed to leave their homes," Kelly said.

"You have got to make sure that those things are taken care of before the government gets into the stimulus game."

Prime Minister Justin Trudeau spoke Monday with Conservative Leader Erin O'Toole. The Opposition leader's office said in a statement that O'Toole asked Trudeau "how many jobs the budget would create," without saying what the answer was, and that Trudeau "did not commit that his budget would reduce taxes on families."

Trudeau's office said the two talked about the budget, and that the prime minister urged O'Toole and his party to support "quick passage" of legislation containing measures from November's economic update.

Trudeau spoke later Monday with Bloc Quebecois Leader Yves-Francois Blanchet. A summary of the conversation provided by the Prime Minister's Office said the pair stressed how all parties in the House of Commons need to work together.

The prime minister said last week he wanted to speak with all opposition leaders early this week about the budget.

This report by The Canadian Press was first published April 12, 2021.