"I [grew] above my pain and bloomed into an Indigenous Woman who wanted to live and wanted to love and respect my culture and traditions.”
May 1, 2021 3:25 PM By: Elisia Seeber, Local Journalism Initiative Reporter 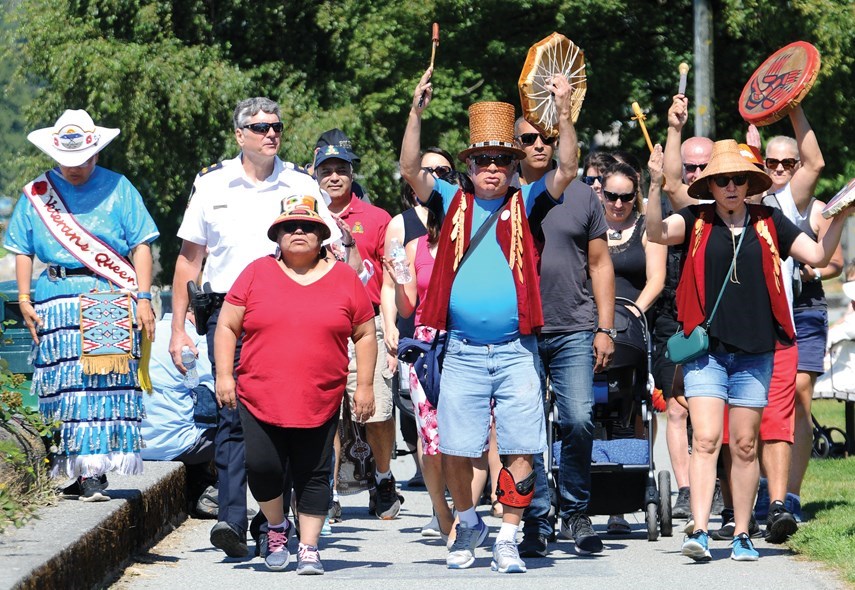 These are just two words that have been used to describe Xele’milh, Doris Paul, an inspirational Squamish Nation Elder and leader who has worked tirelessly for more than a decade for the betterment of her community and to further reconciliation in British Columbia.

A residential school survivor, Indigenous educator, and advocate, Paul’s passion for community safety and hard work over the years has led to initiatives such as the Integrated First Nations Unit (IFNU) with the North Vancouver RCMP, the First Nations Court, and the North Vancouver Integrated Domestic Violence Unit, as well as the North Shore’s Violence Against Women Committee's Strength and Remembrance Pole project.

Her ongoing efforts to bridge connections were recognized this week, as one of nine recipients of the inaugural B.C. Reconciliation Award, which acknowledges extraordinary leadership, courage, wisdom, and dedication in advancing reconciliation for Indigenous people across the province.

The roots of her desire to care for her community run deep to the trauma she endured as a child over the course of 10 years at the Sechelt Indian Residential School, Paul shared in a government release about the award.

“Because of this era, I am an adult healing from my childhood,” Paul explained, adding that the entrenched systemic and societal racism she experienced as an adult hindered her education and employment.

The concept of reconciliation overwhelmed her, but she longed for healing. Eventually, she found new strength: “The idea of residential school was to kill the Indian in me and possibly bury me,” Paul said in the release.

“But if they [did] bury the Indian in me, they actually [planted] a seed. I [grew] above my pain and bloomed into an Indigenous woman who wanted to live and wanted to love and respect my culture and traditions.”

Paul also shared that the first time she ever felt empowered to seek reconciliation for the betterment of her community was in 2005 when she noticed a disturbing trend of youth being given drugs and alcohol at parties. So, she set up a meeting to find out if other parents were aware of what was happening.

Word spread, and Paul was joined by more than 50 parents, later inviting the RCMP and West Vancouver Police Department to join them. Through her persistence, a partnership between the Squamish Nation parents and police was formed, which further ignited her passion to help make a difference in her people.

Through this work, she helped bring police and Squamish Nation’s leadership to the table to begin negotiations for improved services for her community.

Paul is also acknowledged for her unwavering leadership and determination on the North Shore’s Violence Against Women Committee's Strength and Remembrance Pole project, which helped to  "deepen Indigenous cultural understanding and the work of reconciliation for many, most importantly the Missing and Murdered Indigenous Women and Girls."

Through her work on MMIWG, she acted as Cultural Advisor to help create the “Strength and Remembrance Pole,” which now stands outside the North Vancouver RCMP Detachment in honour of the MMIWG, and the lives lost at the Ècole Polytechnique University.

“There are so many important people who have joined this movement, so many stepped forward to lend a hand or [brought] recommendations of services needed, and how to apply the new directives,” Paul said in a release. I would like to thank [the] teammates who stood by my side.”

“We are all paddling in the same direction and we are pulling together.”

So much gratitude to @SquamishNation elder Xele'milh (Doris Paul) for her incredible work in reconciliation and community safety. She is one of nine recipients of @LGJanetAustin's 2021 BC Reconciliation Award.

In a speech to the Legislative Assembly, Bowinn Ma, MLA for North Vancouver-Lonsdale, congratulated Paul, calling her an “incredible and unstoppable woman.”

She praised Paul “for her work to improve community safety, deepen Indigenous cultural understanding and for her work in reconciliation, especially for missing and murdered Indigenous women and girls.”

In a later post to Twitter, Ma said she had so much gratitude to Paul “for her incredible work.”

This isn’t the first time Paul has been recognized for her work, either. In 2017 she was awarded the Be More than a Bystander Award from Ending Violence BC, for her work with the North Vancouver RCMP and West Vancouver police as the Aboriginal Victim Specialist Worker in the North Shore domestic Violence Unit. She also received BC Achievement’s Community Award in 2007 for her work as the founder and chair of Caring for Our Youth Committee.

Janet Austin, lieutenant governor of B.C., who has chosen reconciliation as one of the key priorities of her mandate, said the inaugural recipients of the award are shining examples of those in British Columbia who have demonstrated the many approaches to furthering reconciliation through meaningful action.

“It is humbling and inspiring to read of their stories, their incredible impacts in their communities, and to learn from their perspectives on reconciliation,” she said in a statement.

“Reconciliation must take root in our hearts, within families, between generations, and throughout our communities. I invite all British Columbia to join us in celebrating these champions, to learn from their stories, and to strive to build relationships with each other across cultures.”

Read about the BC Reconciliation Award recipients:

How this young Squamish Nation woman is making a big difference in her community
Feb 24, 2021 8:05 AM