Red roses were laid at the foot of North Vancouver’s Strength and Remembrance Pole on May 5 to mark the National Day of Awareness for MMIWG2S. 🌹
May 5, 2021 5:58 PM By: Elisia Seeber, Local Journalism Initiative Reporter 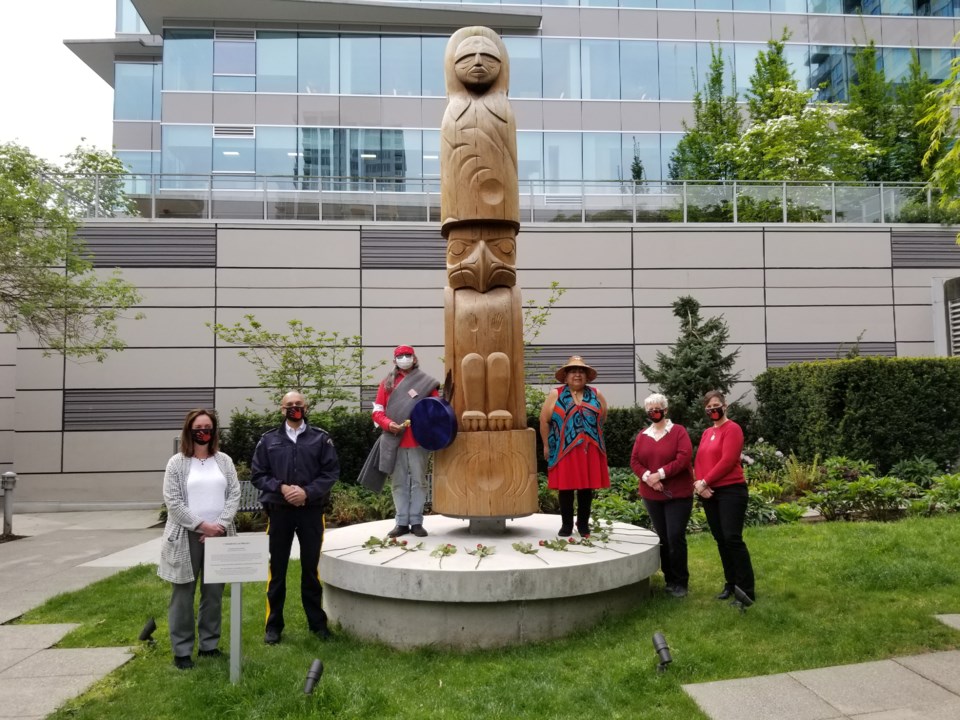 Red roses were laid at the foot of North Vancouver’s Strength and Remembrance Pole on May 5 to mark the National Day of Awareness for Missing and Murdered Indigenous Women and Girls.

The North Vancouver RCMP were joined by members of the Sḵwx̱wú7mesh Úxwumixw (Squamish Nation), the North Shore Violence Against Women in Relationships Committee and the City of North Vancouver in a small but moving ceremony to honour all victims taken far too soon over many years.

Those in attendance were honoured by a traditional Sḵwx̱wú7mesh song and drumming as they each placed roses down one at a time to pay their respects.

“Today the Squamish Nation remembers and honours the thousands of missing and murdered Indigenous women, girls, and two-spirit people, including those lost from our own community,” Squamish Nation spokesmen Chris Lewis, Syeta'xtn, and Dustin Rivers, Khelsilem, said in a joint statement.

“Our slhenlha?nay? (women) and k_'e?mk_'emay (girls) are sacred to us and we join voices across Canada in celebrating their lives and in calling for meaningful and sustained action for justice and an end to this violence.”

Today is the National Day of Awareness for Missing and Murdered Indigenous Women and Girls. We were joined by @CityOfNorthVan & @NSVawir to lay roses for all victims and were honoured by a song & the presence of the @SquamishNation.

The National Day of Awareness coincides with Red Dress Day. During this time red gowns can often be seen hanging in various places across the country to act as a symbol of the indescribable loss and to serve as a striking visual reminder. The day was sparked by Jamie Black, a Metis woman, who created an art project to bring awareness to MMIWG2S by using empty red dresses “to evoke a presence through the marking of absence" over a decade ago.

“We wore red to show solidarity and to honour all the missing women, girls, and two-spirit people,” North Vancouver RCMP wrote in a post to YouTube on May 5.

“The City of North Vancouver, the VAWIR Committee and the North Vancouver RCMP stand together against gender-based violence and strives to provide a voice for those who can no longer speak for themselves.”

In solidarity, Bowinn Ma, MLA for North Vancouver-Lonsdale and Minister of State for Infrastructure, also hung a red dress in her office window.

A red dress 👗 hangs in the window of my #NorthVan office for #MMIWG on #RedDressDay. No more stolen sisters. pic.twitter.com/V517uABUYa

The Strength and Remembrance Pole, which stands tall in the Stella Jo Dean Plaza adjacent to the RCMP building, was erected in Oct. 2019. Carved by Coast Salish artist Sinamkin, Jody Broomfield, it serves as a spiritual beacon for all victims, according to the VAWIR committee, but also offers a place for those impacted to come together and find strength and comfort.

“The Strength and Remembrance Pole is a memorial where the spirits of those taken way too soon can go to rest and find peace,” added the RCMP in a post to YouTube.

The pole is topped with the figure of a woman who represents all those who never came home. She is wrapped in a blanket to symbolize the love and care those gathered still feel for her and she stands atop an eagle, which has carried her home, with courage, to the creator, explained Alroy Baker, the Squamish Nation elder at the unveiling of the pole back in 2019.

To honour survivors and family members of victims, the BC Assembly of First Nations (BCAFN) continued to push for action on systemic causes of all forms of violence on May 5.

"I continue to press for federal and provincial governments’ commitment, focus and energy to escalate movement on the implementation of the Calls for Justice from the Final Report of the National Inquiry into Missing and Murdered Indigenous Women and Girls and the urgent need for the upcoming Action Plan that will guide concrete measures for active solutions to end the violence against Indigenous women, girls and 2SLGBTQQIA+ people,” Terry Teegee, Regional Chief, said in a statement.

“Change is coming in which we will all play a role, and that will ensure First Nations people are safer wherever they live."

The National Inquiry's Final Report was released back in 2019 and made 231 recommendations. The Federal Government delayed the release of a National Action Plan, which was expected last year, due to the COVID-19 pandemic.