VANCOUVER — The addition of a new male calf to a critically endangered pod of southern resident killer whales has left experts happy yet disappointed because it won't further the population of the orcas.
Sep 25, 2020 2:12 PM By: Hina Alam 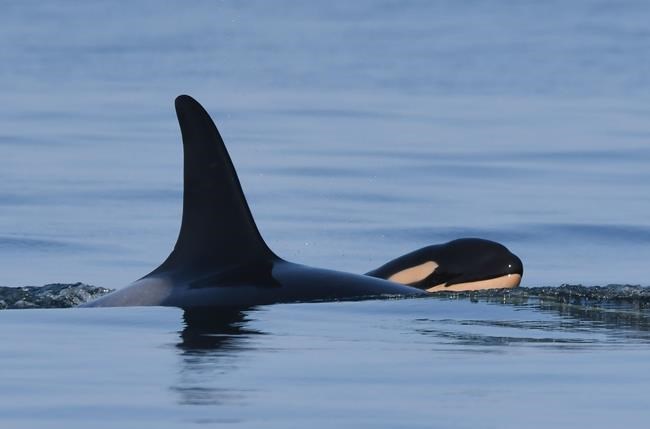 The orca mother that sparked international headlines by carrying her dead calf for 17 days in waters off the Pacific Northwest coast in 2018 has given birth again. The Centre for Whale Research says a new calf was spotted on Saturday with a pod of endangered southern resident killer whales and the mother has been identified as J35, or Tahlequah, shown in a handout photo. THE CANADIAN PRESS/HO/Katie Jones, Center for Whale Research

VANCOUVER — The addition of a new male calf to a critically endangered pod of southern resident killer whales has left experts happy yet disappointed because it won't further the population of the orcas.

The Center for Whale Research in Friday Harbor, Wash., said scientists snapped a photo confirming the sex as the roughly three-week-old mammal rolled and played in West Coast waters just south of the Canadian border while swimming beside its mother, J35.

The feisty boy appeared robust and healthy, it said in a news release. The calf pushes the number of southern resident orcas to just over 70.

Andrew Trites, director of the Marine Mammal Research Unit at the University of British Columbia, said the only down side about a male is that it won't bear more calfs.

"I mean I'm so happy to know that he's alive and he's surviving and seems to be doing well," he said.

"But my fingers were crossed that they were going to give birth to a female. Their future is tied to having more females born. They need more females."

One of the biggest problems facing southern resident killer whales is that they have a higher number of male births and survivals than females, he said.

The skewed sex ratio in such a small population does not bode well for the future, Trites said, adding just one male is needed for numerous females.

The Center for Whale Research said in a news release Friday that a second calf was recently born to J41.

The gender of the newest calf hasn't yet been determined. The centre said it would wait to give the calf a numeric designation.

Approximately 40 per cent of newborn calves do not survive their neonatal first few weeks.

The centre will await the whales' return to evaluate the calf's condition, it said.

Trites said L pod has a gender ratio of about 50-50, which is what is expected from mammal populations.

But the other two pods have about three males for every female.

Joe Gaydos, a wildlife veterinarian, said the skewed sex ratio could simply be a "probability thing" but some scientists believe pollution and lack of nutrition could play a role.

One of the questions asked by researchers is whether there is a higher likelihood of males being born when the female is stressed or carries a large amount of contaminants, said Gaydos, the science director for the SeaDoc Society based at the University of California, Davis.

"More and more work has been done with people looking at nutritional conditions and contaminants. But these animals have had contaminants for a long time, so you know I'm kind of leaning against that," said Gaydos.

"With such a small population it is hard to really know."

Male orcas are not known to share food as much as females although they can dive deeper and perhaps access fish that the others cannot, he said.

They probably play "a lot of important roles" that are not well understood such as protection of the pod so both sexes are important, but a female has greater potential to add to the population over her lifetime, Gaydos said.

This report by The Canadian Press was first published Sept. 25, 2020.