Median rent for one-bedroom apartments in Vancouver a whopping $1940 a month, report finds

While the price of a one-bedroom apartment in Vancouver has decreased slightly this month, the city remains the most expensive in Canada for renters.

Conducted by Padmapper.ca, the January report analyzes rental data from hundreds of thousands of active listings across the country. From there, listings are aggregated every month to calculate median asking rents for the top 24 most populous metropolitan areas.

At the start of its report, Padmapper notes that one-bedroom rentals in Vancouver and Toronto have reached their lowest points in almost four years. The last time Toronto's one-bedroom rent was as low as it is in this report was in February 2017, when it was $1,700. And the last time Vancouver rent was this low was in April 2017, when it was at $1,940.

"It seems the continuous rent price declines from renter migration out of Canada’s two most expensive rental markets have not stopped, even as COVID-19 vaccines have begun to roll out," notes Padmapper.

Vancouver continues to be the country's most expensive city in which to rent, but prices have decreased 0.5 per cent this month over last, with one-bedroom apartments costing $1,940.

Toronto remains the second-most expensive city in which to rent, but the price of renting a one-bedroom has dropped this month over last by 3.3 per cent to $1,770.

This February, Torontonians are paying $2,340 for a two-bedroom rental.

On a year-over-year basis, one-bedroom rents in Vancouver are down over 9.8 per cent, while two-bedroom rentals are down 12 per cent.

Padmapper notes that the large rent price growth rates less expensive cities saw over the past few months has tapered off, "as only 4 cities experienced double-digit year-over-year spikes in this report." However, the company notes that there is overall less demand for rentals during colder months.

Barrie, Ontario moved up a spot to become the fourth priciest city in the country, with one-bedroom rent climbing 4.4 per cent to $1,650. Two-bedrooms had more modest growth, increasing 2.9 per cent to $1,780. 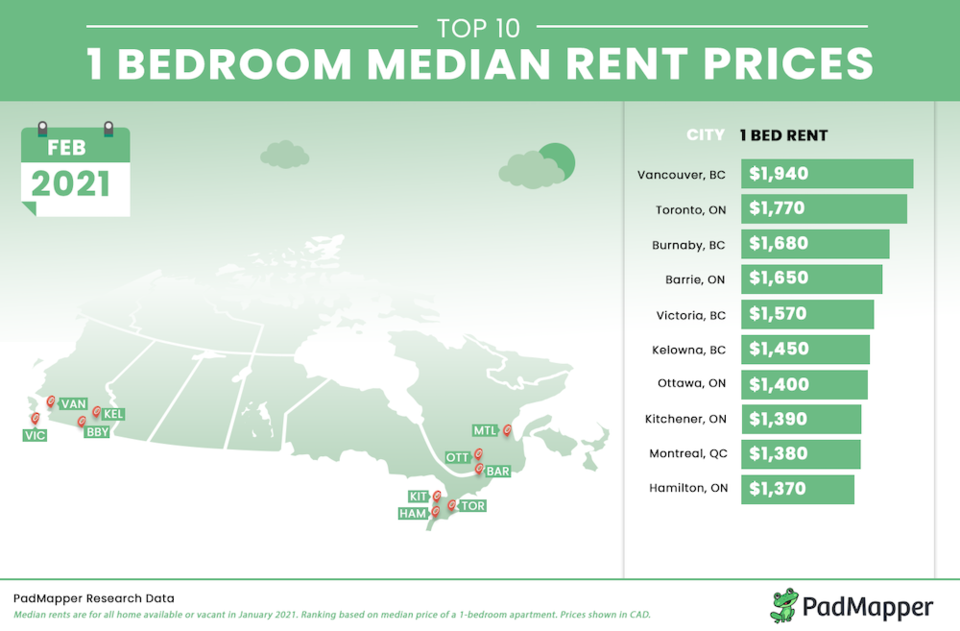