Mike Howell
Aug 11, 2021 4:58 PM
Parliament’s budget watchdog released a report Tuesday that says the federal government’s $72.5-billion 10-year national housing strategy is not having the impact it promised when rolled out in 2017.

In fact, budget officer Yves Giroux said in his report that “we project that in the absence of additional spending, the number of households in housing need would have increased to approximately 1.8 million households” by 2025.

Though Giroux said the Liberal government has increased spending by 50 per cent — or $1.2 billion per year — compared with the 10-year historical average, he cited several factors that “have likely limited the impact” of the strategy over its first three years.

That includes funding for low-income households at “only $192 million per year,” representing a 15 per cent decline in the “real purchasing power of federal spending,” said Giroux, who also noted a significant portion of community housing supported under the government’s bilateral agreements with provinces reached the end of their operating contracts.

“This caused a 183,019 [42 per cent] reduction in the number of low-income community housing units supported under bilateral agreements between 2015 and the baseline established by [Canada Mortgage and Housing Corporation’s] new bilateral agreements,” he said.

The funds for the $72.5-billion housing strategy are primarily administered by Canada Mortgage and Housing Corporation [CMHC] and Employment and Social Development Canada.

Giroux pointed out that CMHC’s capital contribution programs have faced implementation delays, with the corporation spending less than half the funding over the first three years allocated to two of the government’s key initiatives: the National Housing Co-Investment Fund and the Rental Construction Financing Initiative.

On Wednesday, Ahmed Hussen, the federal minister responsible for CMHC, was in Vancouver to announce three loans worth more than $127 million under the Rental Construction Financing Initiative to PCI Developments LP and Mosaic Homes.

PCI is building two 14-storey rental housing towers in the 3600-block of East Hastings Street, one with 94 units and the other with 119. At least 20 per cent of the homes in each building will go to tenants or households earning between $30,000 and $80,000 per year.

Mosaic’s six-storey project at 2109 East Hastings St. will have 42 suites.

Asked to respond to Giroux’s report, Hussen pointed to the previous Conservative-led government in his comments, saying it was “simply absent in terms of both providing leadership on affordable housing, but also the necessary investments.”

Hussen acknowledged the Liberal government could be doing more to increase affordable housing, but said the housing strategy has taken time to roll out and attract interest from the development industry.

“Part of the challenge in introducing any new program is that it takes a little bit of time to get going and for proponents to understand the program and to learn about it, to hear about it, to know how to use it,” he told Glacier Media at PCI’s site at 3680 East Hastings St.

Added Hussen: “But if you look at the Rental Construction Financing Initiative now, as well as the Co-Investment Fund, the uptake has really, really ramped up. And that's why we've had to increase the funding available for that program.” 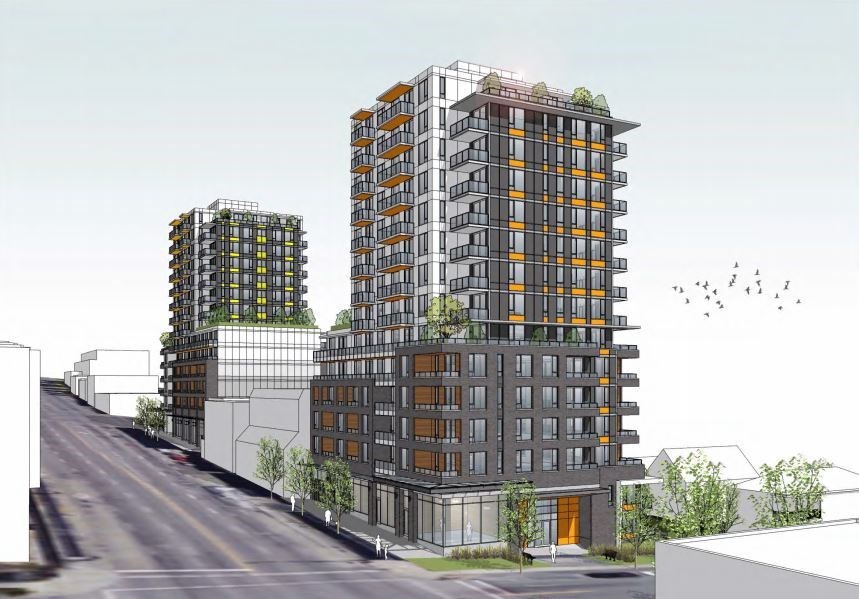 Total cost of both projects is $119 million.

“It’s enabling groups like us to be introducing below market housing into our developments, which we've never had the opportunity to do before,” he said. “We're big, big advocates for this program.”

Max Bruce of Mosaic Homes said at the news conference that the Lakewood Living project at Lakewood Drive and East Hastings will help provide “safe, reasonably-priced housing” in the neighbourhood.

“While this development site was zoned to allow condominiums, CMHC's rental construction loan has allowed us to build rental homes that suit the long term needs of the community,” said Bruce, whose company’s loan from government is $22.75 million. “We are honoured to be among the Vancouver projects chosen for this funding.”

Hussen has been a familiar face — physically and virtually — in Vancouver, across the region and on Vancouver Island in recent months, with stops in Surrey, Burnaby and Victoria to participate in housing and child care announcements.

His presence in the region, where housing affordability is a top issue, comes as an election call looms, with the Liberals hoping to pick up more seats in Metro Vancouver and across the province.

Asked Wednesday when an election will be called, Hussen, who was joined by Vancouver-South MP and National Defence Minister Harjit Sajjan, replied: “I'm working, doing all these things that are expected of me and I leave the speculation to the media.”